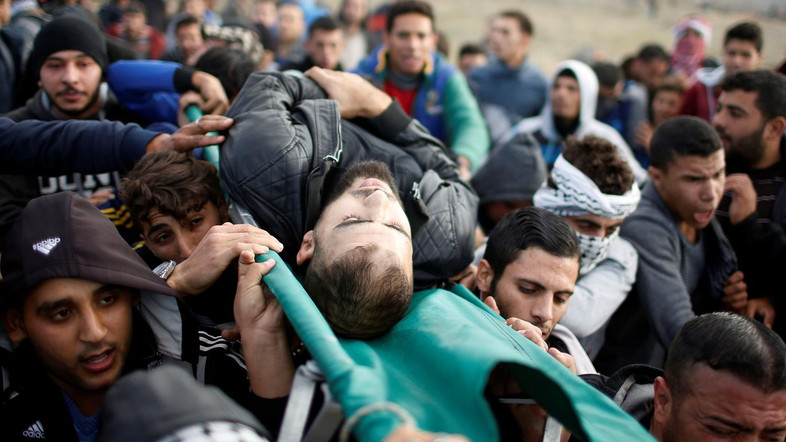 A wounded Palestinian is evacuated during clashes with Israeli troops at a protest against U.S. President Donald Trump's decision to recognize Jerusalem as the capital of Israel, near the border with Israel in the east of Gaza City December 15, 2017. REUTERS/Mohammed Salem

The attack on the Western-backed leader, who is spearheading the Authority’s reconciliation efforts with Gaza’s dominant group, Hamas, happened on the day the White House is due to hold a meeting on the humanitarian situation in the enclave.

There was no immediate claim of responsibility for what one Palestinian Authority security official in Gaza said was a roadside bomb blast.

Minutes after the explosion, the 59-year-old Prime Minister, appearing unhurt, delivered a speech at the inauguration of a waste treatment plant and pledged to continue to pursue Palestinian unity.

He said three vehicles were damaged in the explosion. The blast left a crater by the side of the road and blew out the windows of at least one utility vehicle.

The Authority said it held Hamas responsible for the attack, stopping short of directly accusing the group of carrying out the assault, but suggesting it had failed to provide adequate security.

Hamas and the Palestinian Authority led by President Mahmoud Abbas are still divided over how to share administrative power in the Gaza Strip under an Egyptian-brokered unity deal. Hamas seized control of the Gaza Strip in 2007 from forces loyal to Abbas.

Read the full article written by Nidal al-Mughrabi at the Sydney Morning Herald.