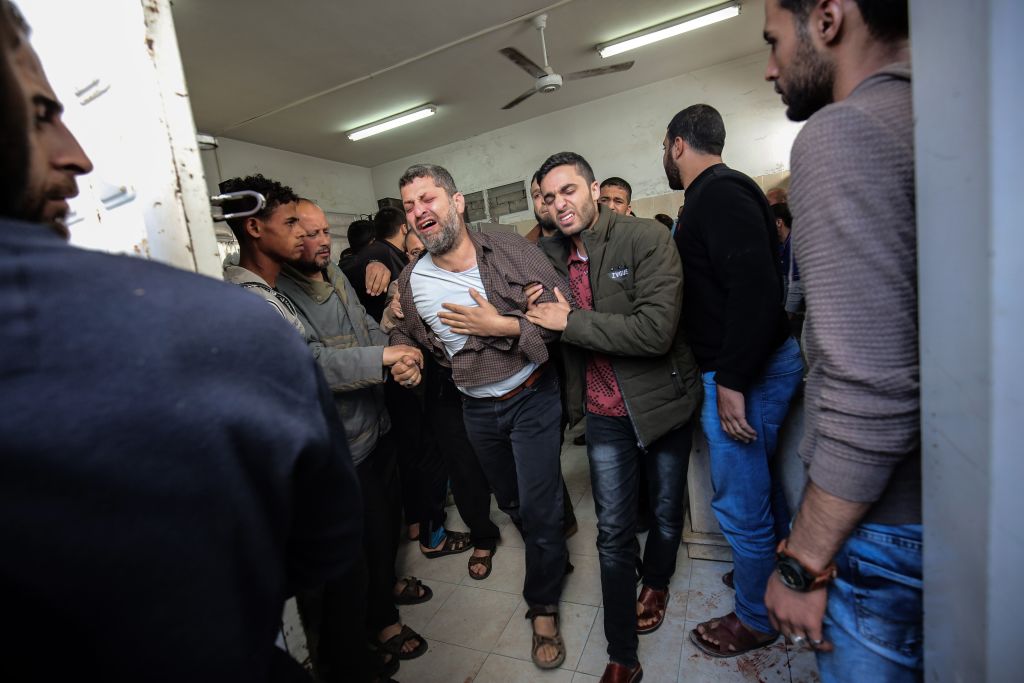 Palestinian relatives of a man who died in an explosion east of Rafah in the southern Gaza Strip, mourn at the Najjar hospital in Rafah on April 14, 2018. Four Palestinians were killed in an explosion near the Gaza-Israel border, the health ministry in Gaza said, in circumstances that were unclear. The Hamas-controlled ministry said the explosion east of Rafah was caused by an Israeli strike, but an army spokesman said they no knowledge of any such strike. / AFP PHOTO / SAID KHATIB (Photo credit should read SAID KHATIB/AFP/Getty Images)

Four Palestinian militants from Islamic Jihad were killed in an apparent accidental explosion near the Gaza-Israel border on Saturday, the group said.

Islamic Jihad’s armed wing, in a statement, said four of its fighters had been killed during “preparations”, without giving further details.

The men died when a tuk-tuk vehicle exploded a few hundred metres (yards) from the border with Israel, an AFP correspondent at the scene said.

Islamic Jihad is an ally of Gaza’s Islamist rulers Hamas.

The group, which is supported by Iran, has fought alongside Hamas against Israel in multiple wars, most recently in 2014.

The explosions come a day after the third Friday of protests along the Gaza-Israel border.

Thousands gathered to call for a return to their historic homelands in what is now Israel.

The protests, planned to last six weeks, are calling for Palestinian refugees to return to their former homes, now inside Israel. Israelis say that amounts to calling for the country’s destruction.

The first two Fridays saw tens of thousands gather at five locations along the border with Israel.

One person was killed Friday as Israeli forces along the border fired at stone-throwing protesters.

Israel accuses Hamas, the Islamist movement that runs Gaza and with whom it has fought three wars since 2008, of using the protests as cover to carry out violence.

So far, Israeli forces have killed 34 Palestinians and wounded hundreds of others.

The clashes between stone-throwing Palestinians and Israeli soldiers took place in multiple spots along the border while tear gas and plumes of black smoke from burning tyres filled the air in some areas.

More than 500 people were wounded, including 122 from gunfire, according to Gaza’s health ministry, with the other injuries including those from tear gas.

Israel’s army estimated the number of people “rioting” at 10,000 and alleged there were attempts to damage and breach the border fence, while it said firebombs and explosive devices were used.

Palestinians also sought to pull away barbed wire set up by Israeli forces to keep them away from the fence, an AFP journalist said.