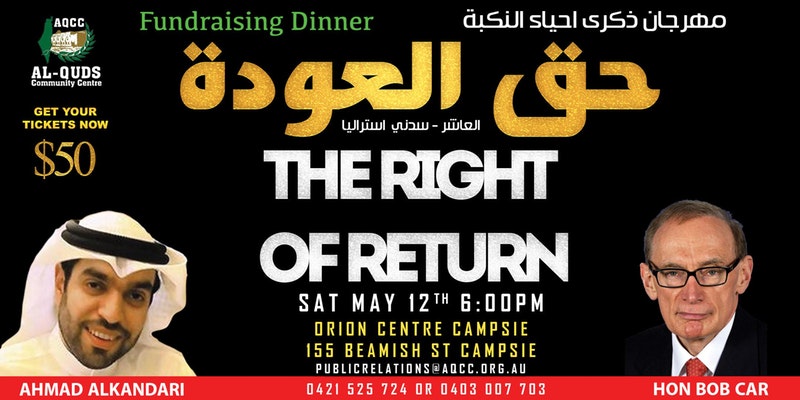 Bob Carr’s withdrawal from the “Right of Return” event on May 12 is to be welcomed (see his tweets below – please scroll down).

What he continues to miss is that his reference to the “70th anniversary of Palestinian dispossession” implies that Israel’s establishment in 1948 itself created the Palestinian refugees, and that Israel is therefore an illegitimate state.  This is not consistent with the Oslo Accords and promotion of the internationally endorsed principle of two States for two peoples.  It is also historically false.  To quote from Benny Morris, a fearlessly impartial and diligent historian:

“it cannot be stressed too strongly that…the events cumulatively amounting to the Palestinian Arab exodus occurred in wartime and were a product, direct and indirect, of that war, a war that the Palestinians started. The threat of battle and battle itself were the immediate backdrop to the various components of the exodus”.

Bob Carr also has had nothing to say about the 800,000 Jews who were expelled from various Arab countries by their respective governments from 1948 onwards. 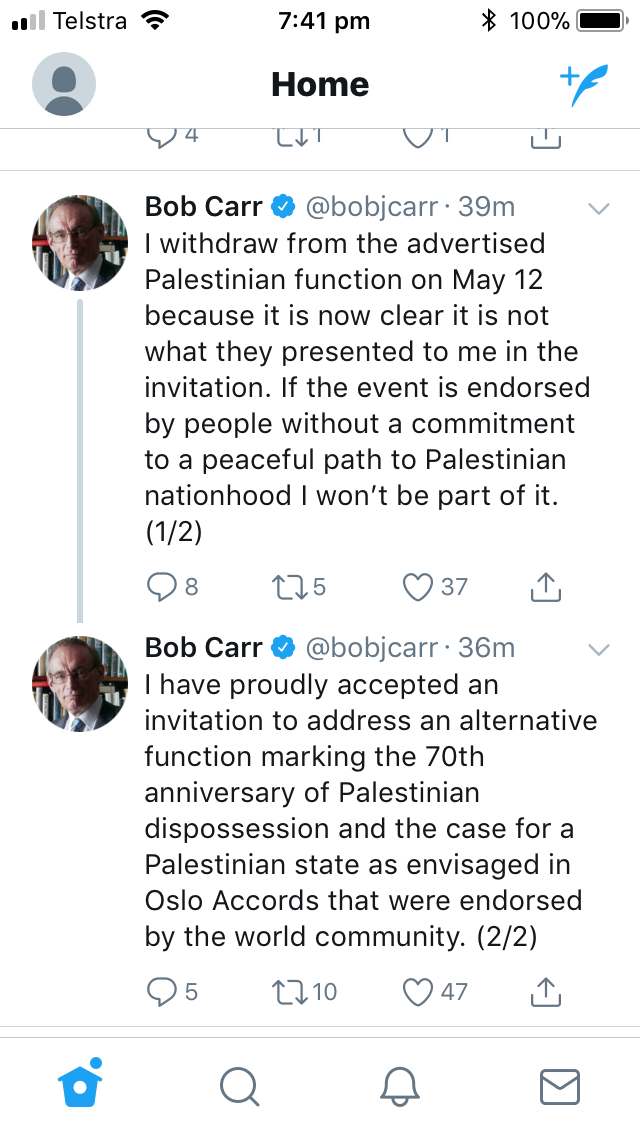 This update has been provided by Peter Wertheim,  co-Chief Executive Officer of the Executive Council of Australian Jewry.

Has Bob Carr now descended to advocating the end of Israel?  See advertisement below (please scroll down).

Endorsement of the so-called ‘right of return’ means demanding that 5 million Arabs who claim Palestinian descent, but 99% of whom have never lived in Israel, must have the right to do so.  This is because a ‘right of return’ is demanded not just for the limited number of 1948 refugees who are still alive but also for all their descendants ad infinitum, who were born and have lived in other countries for their entire lives, and in many cases are even citizens of those other countries. The notion of refugee status being inherited and passed down in perpetuity to remote descendants who have never fled from their homes is without parallel in international law. It is not applied to, nor is it claimed by, any other refugee group.

The so-called ‘right of return’ thus implicitly rejects the internationally-endorsed principle of “two States for two peoples” and is at odds with the global consensus which has always recognized Israel’s right to exist specifically as the nation-State of the Jewish people legitimately created under international law and the UN Charter.

Advocates of a ‘right of return’ are ominously silent about the fate of the Jewish majority who now live in Israel (75% of them native-born) if that demand were ever to be met.