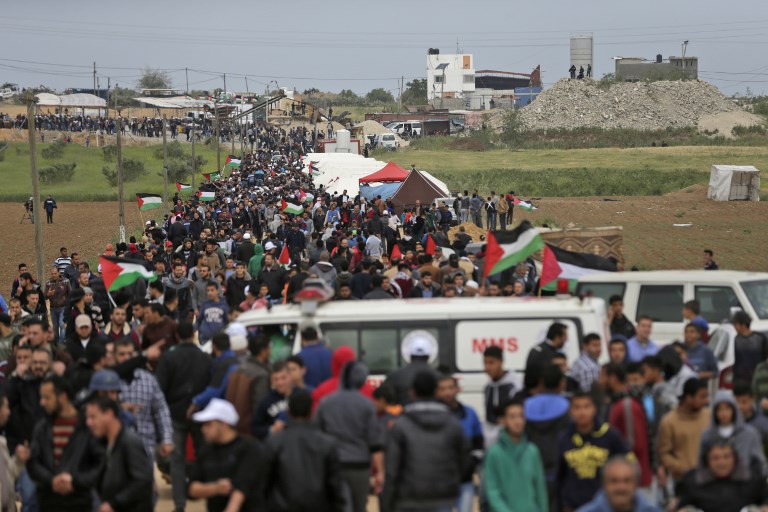 A picture taken on March 30, 2018 shows Palestinians marching past a tent city erected along the border with Israel east of Gaza City in the Gaza strip to commemorate Land Day. Land Day marks the killing of six Arab Israelis during 1976 demonstrations against Israeli confiscations of Arab land. / AFP PHOTO / MAHMUD HAMS

Anthony Albanese’s criticism of Australia’s vote against the biased UN Human Rights Council’s “war crimes” resolution against Israel over Gaza does him little credit. Our vote, alongside the US as the only nations opposed to a resolution supported by such human rights stalwarts as Saudi Arabia, Cuba, Venezuela, Pakistan and Egypt, should do much to expunge the impact of our failure to attend last week’s opening of the new US embassy in Jerusalem.

In 815 words, the UNHRC resolution lashed Israel for allegedly “disproportionate and indiscriminate use of force” in defending itself against thousands of demonstrators sent by terrorist group Hamas to tear down the border fence between Gaza and the Jewish state. It spoke, incredibly, of “peaceful protests”. Yet Hamas admits that 52 of 60 demonstrators killed in one day were its fighters, many of them armed. They hurled volleys of molotov cocktails at Israeli soldiers who were trying to stop the border being overrun. Kites flown overhead were emblazoned with Nazi swastikas. Repeated pushes were made to breach the fence to attack Israelis in their homes.