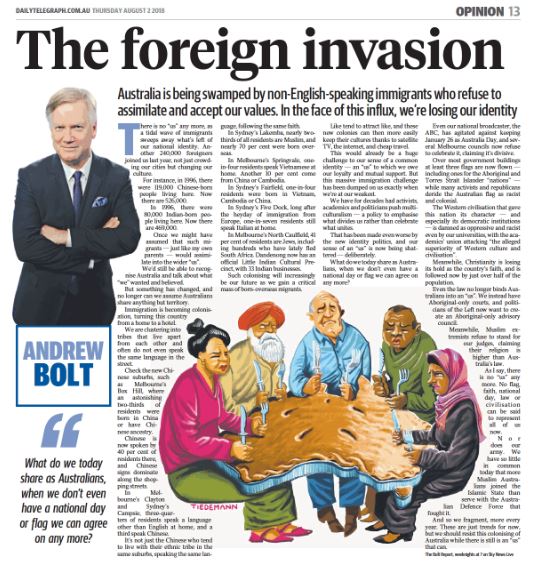 Another Bolt from the White Right

Bolt expresses and inflames the reactionary propaganda and race hatred of a section of Australian society — a section who are exploited by politicians such as Pauline Hanson, particularly during times of economic stress, writes John Passant.

In his article in the Daily Telegraph titled, ‘The Foreign Invasion’, Bolt claims

‘Australia is being swamped by non-English speaking migrants who refuse to assimilate and accept our values.’

He goes on to assert that “we”, that is, Australians, are being colonised.

Who, according to Bolt, is doing this colonising? He lists some examples – comprised of the “usual suspects” – who are forming these “colonies” in various suburbs of Sydney or Melbourne: the Chinese, Indians, Vietnamese, Muslims, Cambodians and others with non-English speaking origins.

First, they take North Caulfield, then they take Australia, eh Andrew? I mention North Caufield deliberately. Bolt identifies it as one of the areas being “colonised”, supposedly by Jews. He says that in North Caulfield ‘… 41 per cent of residents are Jews, including hundreds who have lately fled South Africa.’

Let’s be clear. Bolt’s language about Jews is redolent of the past. In response to the article, the President of the Jewish Community Council of Victoria, Jennifer Huppert, said that there was ‘a rise in ultra-right-wing activity in Victoria and this type of activity can fuel antisemitic, anti-Islam and general racist debate and language in our community.’

The Australian Jewish Democratic society expressed their anger and then stated:

In response we say to Andrew Bolt and white supremacists everywhere: we are not interested in assimilating to White Australia. We are not interested in being subjects of your racist attacks. We – as migrants, as people who have lived in this country for a long time, as people who have faced racism and antisemitism of so many different guises over such a long period of time – are here to tell you that we will win and you will lose. Your vision for how society should operate will never succeed. We will continue to work with other others to ensure that a strong, cohesive, anti-racist, justice-based society is the future for “us” all.

Read the article by John Passant in Independent Australia.