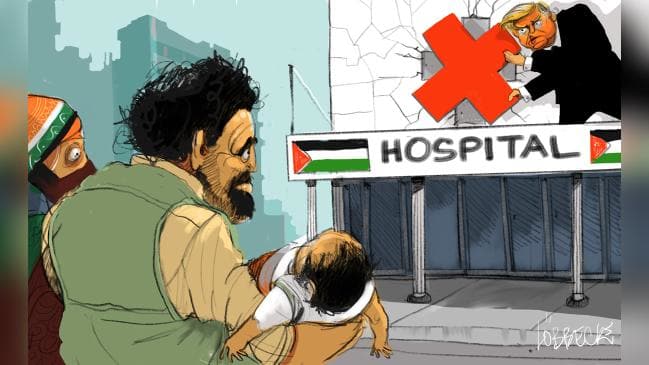 The announcement that the Trump administration will pull $US25 million ($35m) earmarked for the East Jerusalem Hospital Network is surprising, shortsighted and destined to do significant harm to the health of many needy Palestinian patients as well as to the six allied hospitals.

It also will put pressure on Israel’s health system, which has a symbiotic relationship with its Palestinian counterpart in East Jerusalem.

In his pursuit to bring the Palestinians to the negotiating table, US President Donald Trump has thrown the baby out with the bathwater. It would be hard to ­imagine any Israeli involved in the health sector endorsing this ­decision.

The six hospitals, including the venerable Augusta Victoria Hospital and the St John of Jerusalem Eye Hospital, are all independent. They are not operated or owned by the Palestinian Authority. They are faith-based or linked to an internationally recognised agency. They are the only Palestinian hospitals in East Jerusalem and they serve the health needs of the residents of East Jerusalem and patients from the West Bank and Gaza.

In many respects the level of skill of their doctors, nurses and therapists is drawn from the longstanding relationship with their Israeli counterparts, many of whom teach at these hospitals or mentor Palestinian health workers at their own.

Project Rozana, which was launched in Australia in 2013 and is run by Australians, and is now a global enterprise, has made significant investments in people and programs at St John and Augusta Victoria. Both hospitals are beacons of light, exemplifying the benefits that flow to Palestinian civil society from building capacity through close professional relationships with their Israeli counterparts.

Read the full article by Ron Finkel at The Australian (subscription only).