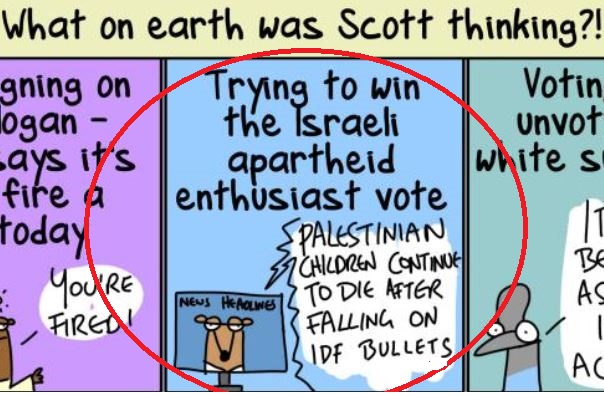 As we’ve noted in a series of Tweets, the Guardian has been obsessed with comments made by Australia’s prime minister Scott Morrison expressing a willingness to consider moving Australia’s embassy to Jerusalem. The remarks, made days before a by-election in the community of Wentworth, were interpreted by many as an appeal to the Jewish residents (who make of 13% of the district) to vote for the Liberal Party candidate David Sharma, Australia’s former ambassador to Israel.

Over the course of three days, the Guardian went into full pro-Palestinian advocacy mode, publishing 15 articles and op-eds on Morrison’s comments, some of which were borderline hysterical, focusing not only on predictable Palestinian criticism and the possible diplomatic fallout with Indonesia, but also on what editors seemed to believe would be the inevitable political upheaval and violence if the policy was enacted.  The Guardian’s predictions of calamity if Australia moved their embassy mirrored their alarmist predictions ahead of the US decision to move their embassy, prophecies of regional doom which, of course, didn’t come true.

But, Guardian contributors still weren’t finished with vilifying the proposal.  Their cartoonist ‘First Dog on the Moon’ published a graphic take on the fallout of the election titled ‘Wentworth and the charred remains of the Morrison government’s hopes and dreams’.  Whilst most of the cartoon deals with Australian political issues unrelated to Morrison’s embassy comments, it devoted a frame to the row (refer image here).

Read the article by Adam Levick on UK Media Watch.