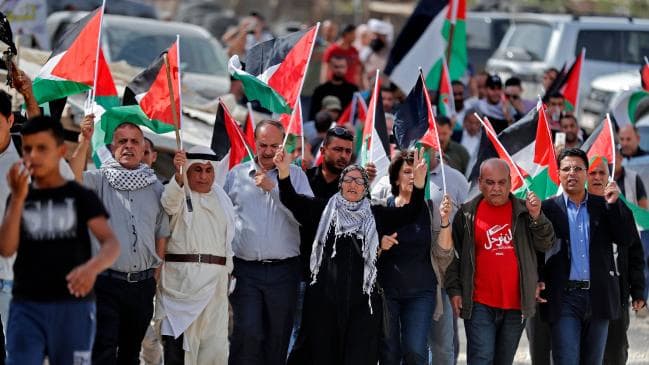 Netanyahu pulls the tent on demolition of Bedouin village

Israeli Prime Minister Benjamin Netanyahu has ­frozen plans to demolish a strategically located Bedouin village in the occupied West Bank that has drawn the world’s attention.

“The intention is to give a chance to the negotiations and the offers we received from different bodies, including in recent days,” a statement yesterday from Mr Netanyahu’s office said about Khan al-Ahmar.

Mr Netanyahu’s office announced the move yesterday as Defence Minister Avigdor Lieberman ordered the the country’s goods and people border crossings with Gaza to be opened, four days after shuttering them following a Palestinian rocket attack that sparked retaliatory strikes.

Israeli authorities say the small village of Khan al-Ahmar, east of Jerusalem along a road leading to the Dead Sea, was built illegally, and had given resident until the beginning of October to evict themselves and demolish the structures.

The fate of Khan al-Ahmar has drawn international concern, with European countries calling on Israel not to move ahead with plans to demolish it.

On Wednesday, the Inter­national Criminal Court’s chief prosecutor warned that Israel’s planned “evacuation by force” of the village could constitute a war crime.

The residents have refused to leave on their own, and Israel had been making the preparations to expel the residents and demolish the village. The decision to evict the village followed years of legal battles and came after negotiation attempts to agree on an alter­native site for relocation failed.