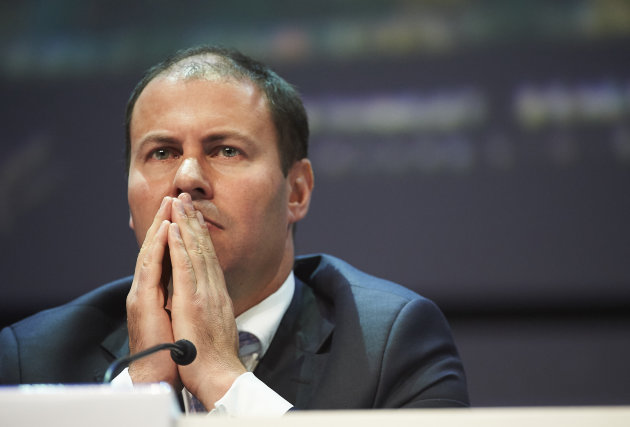 Josh Frydenberg, Australia's minister of resources and energy, looks on during the International Conference & Exhibition on Liquefied Natural Gas (LNG) in Perth, Australia, on Wednesday, April 13, 2016. Frydenberg said he is very upbeat about the future for gas, citing the growing world population as a key driver for the gas market. Photographer: Aaron Bunch/Bloomberg via Getty Images

Josh Frydenberg has attacked Mahathir Mohamad for making anti-Semitic remarks and for describing Jews as “hook nosed” in response to a warning from Malaysian Prime Minister that moving Australia’s embassy to Jerusalem could encourage terrorism.

“Dr Mahathir does have form, as you know, he’s made a number of derogatory comments in the past about Jews being hook nosed, he has questioned the number of people that have been killed in the Holocaust and he also saw the banning of Schindler’s List — the movie about the saviour of millions of people by righteous gentiles through that horrible period in world history,” Mr Frydenberg told the ABC.

“Australia will make its own decisions based on its national interest.”

The Prime Minister, speaking in Darwin today, said Dr Mahathir brought up concerns about the possible embassy move in a “courteous” way when the two met at the ASEAN Summit in Singapore.

Scott Morrison did not criticise Mr Frydenberg for raising Dr Mahathir’s anti-Semitic comments and said the Treasurer was “filling in” the background on the Malaysian leader’s past.

“I think what Josh said today was filling in the history of his record on various issues over time. I think those issues are well known,” Mr Morrison said.

“His contribution to the public record on those topics are well known. They go back a long way through many, many Prime Ministers, going back to Paul Keating, as we remember. So Australia decides foreign policy in Australia.”

Former Foreign Minister Bob Carr has said the government’s position on the Jerusalem embassy represented a “success” for the Israel lobby and criticised Mr Frydenberg for “assailing” a leader of a country otherwise friendly to Australia.