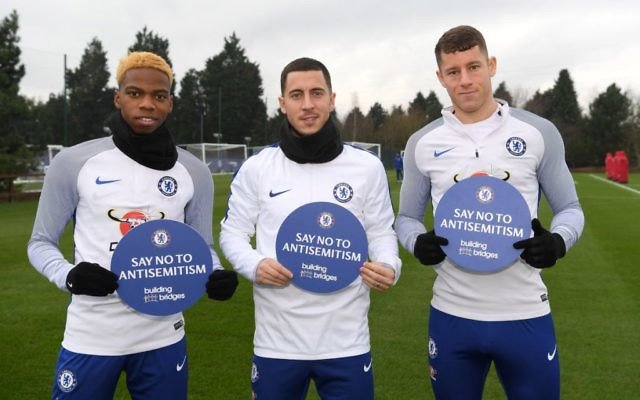 Chelsea have said they will take the ‘strongest possible action’ against fans found to have sung anti-Semitic chants.

Anti-discrimination leaders and Jewish groups have joined Chelsea in condemning the anti-Semitic chanting by some of the London club’s supporters.

Days after four Blues fans were suspended for abusing Raheem Sterling, with some of the language used allegedly racist in nature, the unsavoury behaviour of a minority of supporters has been highlighted for a second successive match.

The Jewish Leadership Council, Board of Deputies of British Jews and anti-discrimination group Fare supported Chelsea’s stance while attacking the perpetrators.

Piara Powar, executive director of Fare, described the episode as a “sad indictment” of the ignorance of some supporters.

In a statement issued to Press Association Sport, Powar said: “This latest incident involving Chelsea fans singing anti-Semitic songs in Budapest is a sad indictment of where some people are in their understanding of racism and the impact it can have.

“They stare history in the face and think they are somehow exempt from the judgements it will make on their actions.

“We should give a lot of credit to those Chelsea fans who highlighted what was going on at the match on social media or directly to the authorities.

“The sad fact is that in recent years Chelsea have done an incredible amount of work to tackle anti-Semitism, much of it highly innovative and impactful.

“But there remains throughout football a rump of people who in 2019 will see the political atmosphere as a cover for their own racism and prejudice.”

Read the article on Eurosport Football.

Also refer to We must stamp out discrimination, says Fabregas as Jewish groups condemn chants