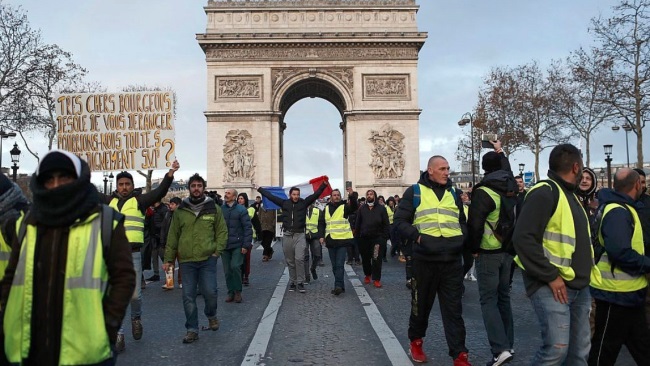 Rise and Expansion of the Yellow Vests

Yellow vest drama continues in France and now spreads throughout Europe and beyond.

French police have fired tear gas across Champs-Elysees Avenue in Paris and protesters have scuffled with police outside the city’s opera house in the fifth straight weekend of protests by the “yellow vests” movement.

Belgian police said a man died after he crashed his car into a truck at a protesters’ roadblock on the Franco-Belgian border.

He was the seventh person to die in a wave of anti-government demonstrations against the high cost of living.

Of course, being a primarily European protest movement, certain Continental traditions must be observed:

French Jews have become a focal point for the “Yellow Vest” protests across France, with an increase in anti-Semitism by demonstrators. In recent days, the Jewish community has reported numerous anti-Semitic videos, graffiti and actual threats appearing in central locations and on social media.

Read the article by Tim Blair in The Daily Telegraph.