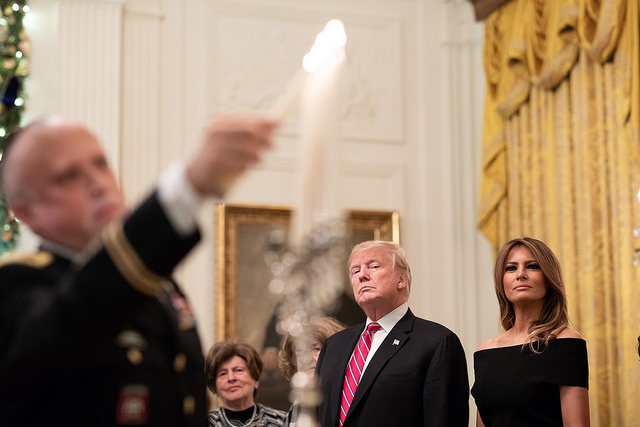 The Trumping of the Middle East

US President Donald Trump may be mercurial, but he does have a doctrine. As his speechin September at the United Nations General Assembly again confirmed, Trump rejects multilateral institutions and liberal values in favour of the nation-state and power politics. But understanding the ‘Trump doctrine’—with its support for abandoning America’s longstanding role as a global arbiter—does not make it any less disruptive, especially for the already unstable Middle East.

It is no surprise that the Middle East has been particularly vulnerable to the unsettling effects of the Trump doctrine. After all, the timid policies of Trump’s immediate predecessor, Barack Obama, significantly exacerbated the region’s dysfunction, opening the way for Trump to introduce what can only be described as mayhem.

For starters, the Obama administration utterly failed to make progress in resolving the Israeli–Palestinian conflict—a failure Trump promised to correct with the ‘deal of the century’. Instead, Trump has unilaterally recognised Jerusalem as the capital of Israel, moving the US embassy there, and ended financial support to the United Nations Relief and Works Agency, which supports more than five million registered Palestinian refugees. One must be extraordinarily ignorant to believe Trump’s claims that these actions amount to taking two of the thorniest issues in the Israeli–Palestinian conflict ‘off the table’.

Making matters worse, by abandoning efforts to overthrow Syrian dictator Bashar al-Assad, the Obama administration opened the door for Russia to move into the region. Under Trump, in a sinister reversal of America’s Cold War victory, the Middle East has become Russia’s playground.

Egypt, a close US ally, has signed huge arms deals with Russia, which is also providing four nuclear-power reactors to the country. The bilateral relationship has been deepened through close military cooperation in Libya—a country that, totally ignored by the United States, has become a vital strategic link in Russia’s penetration of the Western sphere of influence, exemplified by the Kremlin’s efforts to build a naval base there.

Saudi Arabia, which has long benefited from America’s security umbrella, has also purchased nuclear-power reactors and advanced S-400 missiles from Russia. And Bahrain, Morocco and the United Arab Emirates are pursuing arms deals with Russia.

Turkey, a key NATO ally, is also moving into Russia’s strategic orbit. When it comes to his country’s faltering economy and democratic backsliding, President Recep Tayyip Erdoğan has much to answer for. But the Trump administration’s decision in August to double US tariffs on steel and aluminium as punishment for Turkey’s refusal to release an American cleric arrested for alleged ‘subversive activities’ undoubtedly contributed to the lira’s collapse. In fact, the Trump administration has offered no indication that it cares whether Turkey remains a US ally at all.

Read the article by Shlomo Ben Ami on The Strategist.