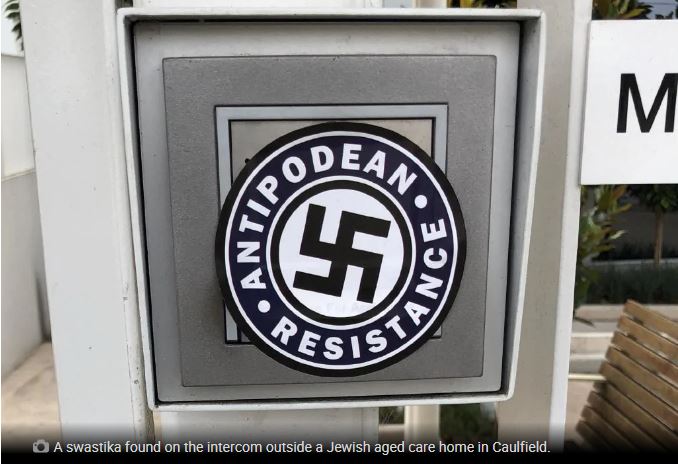 A Jewish aged-care centre that is home to Holocaust survivors has been attacked by a neo-Nazi group.

A swastika by the extremist Antipodean Resistance group was found at the front gates of Emmy Monash Aged Care in Caulfield on New Year’s Day.

Sam Seigel made the discovery while visiting his parents, both aged 94.

He labelled the targeted attack “disturbing”.

“I saw it stuck to the front gates. I just stood there and looked — it knocked me about,” he said.

“You don’t expect to see those sorts of things, especially at an aged-care residence.”

He said many of the agedcare residents are Holocaust survivors, or had family affected by the atrocity.

“It is disturbing. These Right-wing extremist groups should be outlawed … to go so low as to put this sticker on an aged care home,” he said.

“These are old people — what can they do? They’d be scared.”

It comes as similar anti-Semitic attacks have been carried out across the southeastern suburbs.

Hateful vandals wrote “Are Jews religious or criminals?” on a sign outside a St Kilda theatre this week.

And the same swastika was found by a resident at her Inkerman Rd, Caulfield apartment building.

Chairman of the Anti-Defamation Commission Dr Dvir Abramovich blasted the attacks as “cowardly and evil”.

He said there were “mounting concerns” anti-Semitism was on the rise in Australia after the commission recorded its “largest single-year increase” of attacks in 2018.

Read the article by Aneeka Simonis in the Herald Sun.