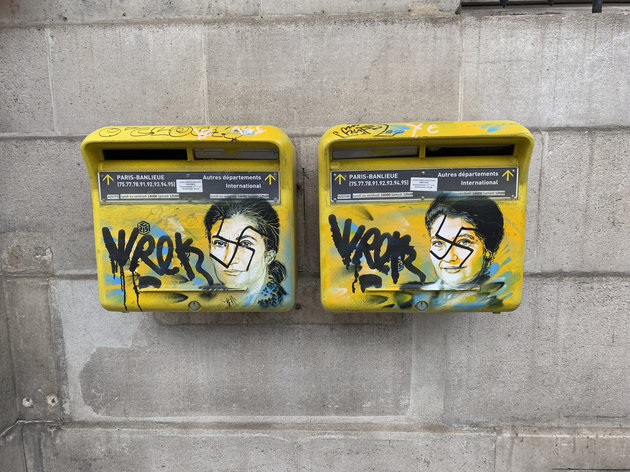 This photo taken on Monday, Feb. 11, 2019 and provided by the Paris city hall of the XIIIth district shows mailboxes with swastikas covering the face of the late Holocaust survivor and renowned French politician, Simone Veil, in Paris, France. According to French authorities, the total of registered anti-Semitic acts rose to 541 in 2018 from 311 in 2017, a rise of 74 percent. (Mairie du XIIIth via AP)

Paris | Thousands of people rallied across France after a surge of anti-Semitic attacks that included the painting of red swastikas and anti-Jewish slogans on dozens of graves in a Jewish cemetery.

Political leaders from all parties, including former presidents François Hollande and Nicolas Sarkozy, gathered in Paris on Tuesday (Wednesday AEDT) filling the Place de la Republique, a symbol of the nation, to decry anti-Semitic acts with one common slogan: “Enough!”

People also lined the streets of cities from Lille in the north to Toulouse and Marseille in the south. President Emmanuel Macron paid respects at one of the 96 desecrated graves in the village of Quatzenheim, 15 kilometres from the city of Strasbourg on the border with Germany.

After falling for two successive years, the number of anti-Semitic attacks in France surged to more than 500 last – up 74 per cent from 2017, the government reported last week.

“Whoever did this is not worthy of the French republic and will be punished… We’ll take action, we’ll apply the law and we’ll punish them,” he said, walking through a gate scarred with a swastika as he entered the graveyard.

Macron later visited the national Holocaust memorial in Paris with the heads of the Senate and National Assembly.

France is home to the biggest Jewish community in Europe – about 550,000 – a population that has grown by half since World War II, but anti-Semitic attacks remain common.

“Some people are provoking the authority of the state. It needs to be dealt with now and extremely firmly,” Sarkozy told reporters. “It’s a real question of authority. Violence is spreading and it needs to stop now.”

Read the article by Vincent Kessel and Noémie Olive in the Australian Financial Review.