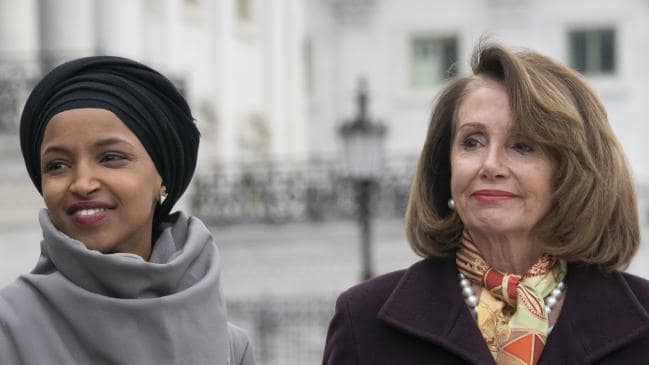 It took several years for anti-Semitis­m on the Left to become a central issue in British politics. In the US, it has taken barely a week.

Recent comments made by Ilhan Omar, a congresswoman, have unleashed a row that is threatening to become a more permanent schism and could change the face of Democratic politics. For those watching from across the Atlantic, it is all agonisingly familiar.

Ms Omar, one of the two first Muslim congresswomen, has a history of controversial comments when it comes to Israel.

In 2012, she tweeted: “Israel has hypnotise­d the world, may Allah awaken the people and help them see the evil doings of Israel.”

Last month, during another Twitter discussion, she opined that US support for Israel was “all about the Benjamins baby”, a reference to the $100 bill, which bears the image of Benjamin Franklin.

The implication was that Jewish­ money — as opposed to innate­ pro-Israel sentiment — was responsible for America’s friendly policy towards Israel.

Ms Omar apologised but reignited the debate at a Washington bookshop event last week, saying: “I want to talk about the political influence in this country that says it is OK for people to push for allegiance­ to a foreign country.”

She was criticised for deploying the “dual loyalty” trope, which questions the allegiance of pro-Israel­ Jews to their own countries. This time, however, she is not backing down.

Democratic politicians res­pon­­d­ed to her remarks by drafting a resolution condemning anti-Semitism. It did not name her, but the implication was clear.

However, Ms Omar’s supporters in the party pushed back against the resolution and pointed out she had been the target of considerable Islamophobia. A sign at a recent event sponsored by West Virginia Republicans claimed that she was living proof America had not learned the lessons of 9/11.

The resolution that eventually passed comfortably through the House of Representatives on Thursday was broadened considerably, condemning bigotry towards­ “African-Americans, Nat­ive Americans and other peopl­e of colour, Jews, Muslims, Hindus, Sikhs, immigrants and others” and leaving few people from any camp fully satisfied.

“We left out wiccans,” joked one Republi­can congressman.

Read the article by Josh Glancy in The Australian (from The Sunday Times).