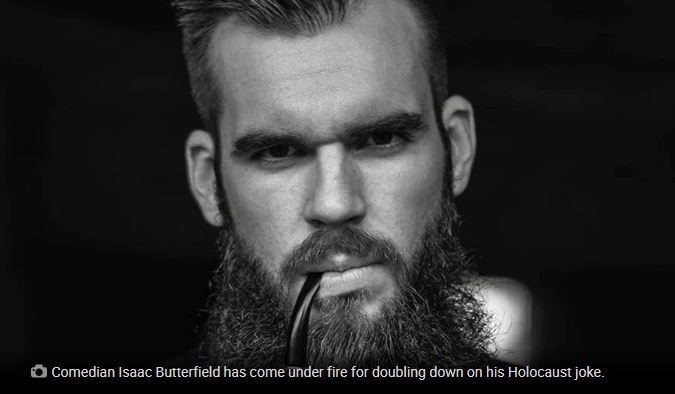 A stand-up comedian who joked about the mass murder of millions of Jews during the Holocaust told an offended Jewish audience member “if you can’t stand the heat get out of the oven.”

Comedian Isaac Butterfield has come under fire by the Anti-Defamation Commission following his performance at the Melbourne Comedy Festival on April 11.

A Jewish woman who attended his show said he made the remark “imagine the joy of people when they heard the Jews were sent to the gas chambers” during the gig.

Offended by the comment, she sent Mr Butterfield an email, saying: “Sitting there hearing about Jews being gassed, eight million perished including children, watching family members being gassed or tortured or shot, is not remotely funny.”

He replied: “If you can’t stand the heat, get out of the oven.”

The woman, who did not want to be identified, saw this as a further attack on her community.

“This is simply disgraceful, I am outraged and distressed that this type of attitude and ignorance exists and is a topic of humour for a one-man show,” she said.

Anti-Defamation Commission chairman Dvir Abramovich said the comedian should apologise for the comments.

Read the article bu Aneeka Simonis in the Herald Sun.