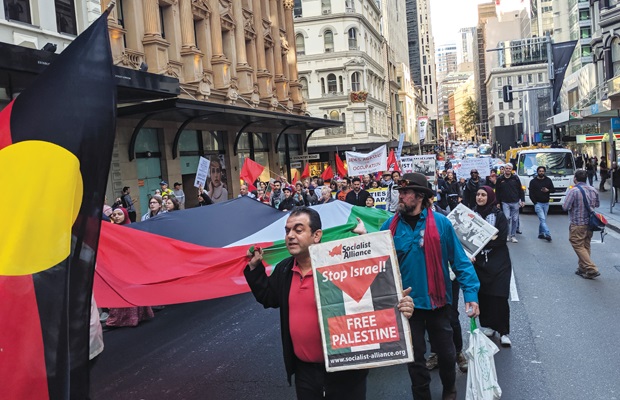 On 11 May, a commemoration of the Nakba saw hundreds stand in solidarity with Palestinians at a rally in Town Hall. The day was organised by Palestine Action Group Sydney and BDS Australia.

Protestors demanded the right of return for all Palestinians and a  boycott of this year’s Eurovision Song Contest which is to beheld in Tel Aviv this weekend. Protesters were accompanied by a giant Palestinian flag while enthusiastic chants including, “from the river to the sea/Palestine will be free” could be heard amongst the crowd.

So what is the Nakba? Meaning “catastrophe” in Arabic, it’s the day apartheid was firmly established in Israel, on May 15, 1948. 85% of the Palestinian population, around 750 000 people, were systematically expelled from their land by the Israeli military. Palestinians were only given minutes warning in many cases, and it is said that even today, families still have the keys to their stolen houses.

The legacy of the Nakba is still felt today among Palestinians; as Greens senator Mehreen Faruqi said at the rally, “71 years later, we have not forgotten…the Nakba is a lived history.”

74% of Palestinians today are refugees and many are direct descendants of people made refugees by the original Nakba. As such, the right of return has become a central demand for the Palestine solidarity movement.

“Nakbas” continue to happen frequently. Israel has expanded outward in its 71 year-long occupation and as a result, all that remains of historical Palestine are the tiny and separated areas of the West Bank and Gaza, making the initial division of Palestine look utopian. The West Bank is kept under a repressive leash and Gaza has had a blockade imposed on it — it  will become uninhabitable by next year. Gaza has been a focal point of the movement, with the rally in Sydney demanding an end to the siege and chanting “long live Gaza.”

Read the article by Sophie Haslam in Honi Soit.