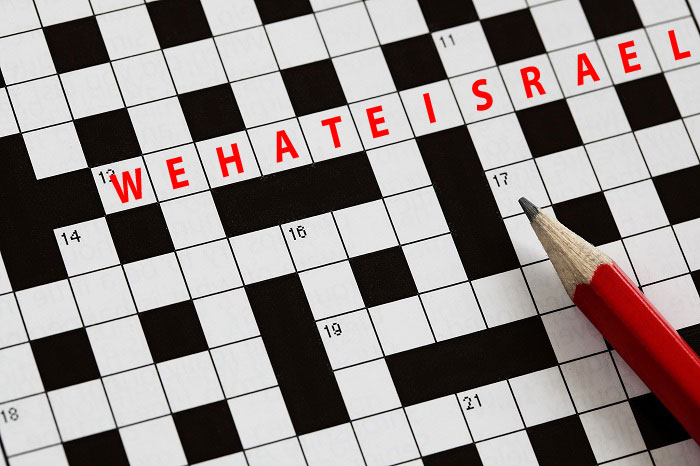 The war against Israel’s very existence is waged even in the crosswords of The Age and the Sydney Morning Herald. Clue to Monday’s crossword, down 5?: “The Holy Land.”

But, wait. Israel doesn’t have nine letters, does it?

Surely the answer is Israel? Unless, you are doing the crossword in today’s @theage and @smh newspapers, where the Holy Land is apparently Palestine. pic.twitter.com/lD3D0lBtab

An investigation has been launched, they say:

SMH editor Lisa Davies told The AJN, “The crosswords are provided by an external contractor (they’re not done in-house) so I wasn’t aware of this. We are making inquiries about this immediately.”

The papers also put out a statement in which they said they “apologise for any offence caused”.

[Editor: Of course a pro-Palestinian activist like Randa Abdel-Fattah had to spew out a contemptuous remark:

When Zionists get upset about crosswords…
This is so demented it’s hilarious. pic.twitter.com/JSULiSthx8

Somebody should ask her whether it would bother her if the answer to the crossword clue ‘How does one refer to the non-Jewish residents of the West Bank?’ was Arabs and not Palestinians.

What’s more this information has been posted on the Zionist Federation of Australia’s website and has led to a hateful flock of trolls commenting.