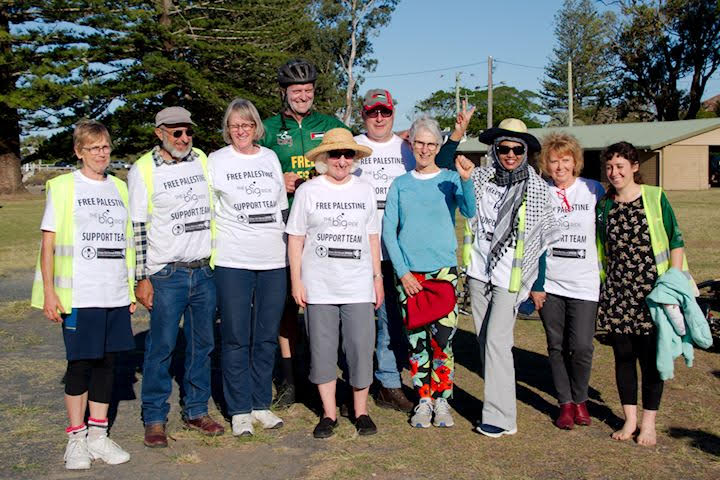 Brisbane Cycles for Solidarity: The 2019 Big Ride for Palestine

Early on the morning of Saturday 31st August, twenty-three cyclists and their support crew came together in South Brisbane for the third annual Big Ride for Palestine!

The night before, the riders and supporters had been treated to a concert of the Palestinian American poet, Remi Kanazi, Brisbane-based Lebanese musician, Phil Monsour, and the Al Zayton Palestinian Dabke Troupe, in which the struggle of the Palestinian people was expressed through music, poetry and dance.

The riders fund-raised for a Union Aid Abroad – APHEDA project in Gaza delivered in partnership with the Ma’an Development Centre. The project supports small-scale farmers in developing sustainable agricultural in an area where water supplies are scarce and access to markets is impacted by political conflict and restrictions on the movement of people and goods.

On Sunday afternoon, sixteen riders completing the ride were given a very warm welcome by the Byron Bay Friends of Palestine and a group of supporters who had driven from Brisbane. Speeches and thanks were given to the riders and the support crew. It was announced that over $9,000 had been raised to help Palestinian farmers secure dignified livelihoods.

Read about this fundraising iniatiative from Union Aid Abroad -APHEDA.