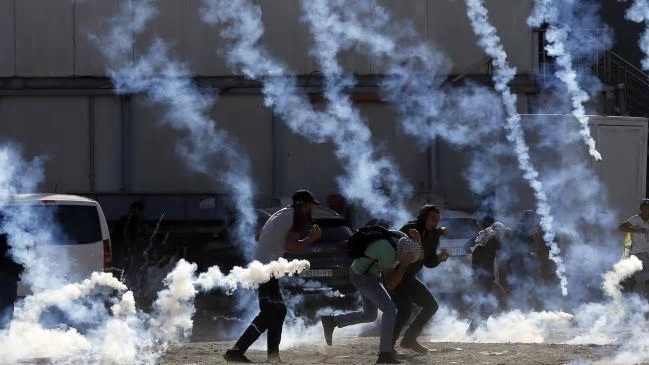 Palestinians wage settlement ‘day of rage’ against US policy

Thousands of Palestinian protesters took part in a “day of rage” across the occupied West Bank on Tuesday, with some groups clashing with Israeli forces to protest against the US announcement that it no longer believed Israeli settlements violated international law.

About 2000 people gathered in the West Bank city of Ramallah by midday, where they set ablaze posters of US President Donald Trump as well as Israeli and American flags. Schools, universities and government offices were closed and rallies were being held in other West Bank cities.

“The biased American policy towards Israel, and the American support of the Israeli settlements and the Israeli occupation, leaves us with only one option: to go back to resistance,” Mahmoud Aloul, an official with Palestinian Authority President Mahmoud Abbas’s Fatah movement, told the crowd in Ramallah.

Demonstrators held signs reading: “Trump to impeachment, (Israeli Prime Minister Benjamin) Netanyahu to jail, the occupation will go and we will remain on our land.”

At Israeli checkpoints near Ramallah, Bethlehem and Hebron, dozens of protesters threw stones at Israeli forces, who responded with teargas. There were no immediate reports of injuries.

Later in the evening, the Israeli military said it identified two rockets fired from the Gaza Strip at southern Israel. One was intercepted by an Iron Dome missile battery. It was the second such attack in as many days by Palestinian militants, and Israeli aircraft retaliated with attacks on several Hamas sites in Gaza. There were no reports of injuries.

Read the article by Mohammed Daraghmeh in The Australian.