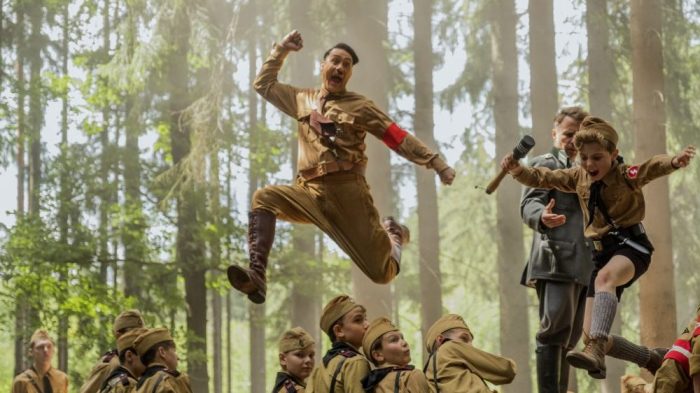 Hitler comedy as a concept? It’s a risky move, but it works in Jojo Rabbit

The New Zealand director Taika Waititi (Boy, Hunt for the Wilderpeople, Thor: Ragnarok) has copped some flak since Jojo Rabbit premiered to great applause at the Toronto International Film Festival in September. I imagine he was expecting it.

When you put the words “Hitler” and “comedy” together in a concept, trouble will find you, and he’s in good company. The British government was concerned about Charlie Chaplin making The Great Dictator in 1940; Ernst Lubitsch raised some eyebrows when he made To Be or Not to Be in 1942. Mel Brooks has twice courted trouble with The Producers and his remake of Lubitsch’s film.

Depictions of Hitler as the butt of satire tend to upset some people, regardless of intent. We can assume that Waititi, the son of a Maori painter and a Russian Jewish mother, knew exactly what he was doing when he decided to write the script, adapting a book by Christine Leunens. Waititi himself plays a comedic version of the Fuhrer, who appears as a small boy’s imaginary friend. The director wants Jojo Rabbit to be noticed – and it deserves to be.

It’s an audacious, challenging form of comedy, the upsetting kind. It looks from the publicity like a children’s film, but it is anything but.

The premise may be cute – a 10-year-old German boy, Jojo, struggles to be a good Hitler Youth in World War II – but there is real violence and trauma around the corner. As the kid wises up about the war, the Nazis and the reality of the lies on which he has been raised, people are dying in the streets of his otherwise picturesque small town. In that sense, it’s a film about the betrayal of a child’s innocence. It’s important to say nothing about the film excuses the behaviour of the adults who surround Jojo (Roman Griffin Davis) and fill his head with poisonous rot. Most of them are portrayed as buffoons, but they’re nearly all a long way from harmless.

Read the review by Paul Byrnes in The Sydney Morning Herald.