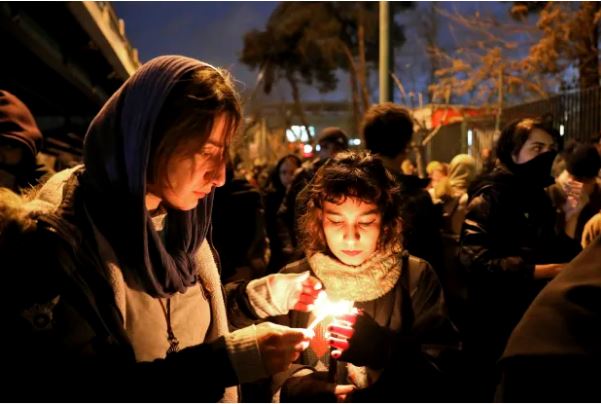 Toronto/Tehran | Conditions boiled over as Iranians gathered for a second night of protests after the government admitted it had mistakenly downed a Ukrainian passenger jet, triggering global outrage as well as internal dissent.

Security forces stepped up their patrols as protesters, many of the them students, came out in force in Tehran’s landmark Azadi Square and at Shahid Beheshtri University, as well as in several regional cities.

Videos posted on social media, which could not immediately be verified by Bloomberg News, showed clashes between protesters and riot police, trails of blood on a main street, chants in opposition to Supreme Leader Ayatollah Ali Khamenei, and calls to rid the country of the Islamic Revolutionary Guards Corps. Protesters in the videos said arrests had been made and tear gas fired at crowds.

Anger spread across the globe after Iran’s leaders admitted on Saturday that its military accidentally shot down the Ukrainian jet on Wednesday, killing all 176 people on board, after mistaking it for a cruise missile.

The announcement was a dramatic reversal after the regime spent days accusing Western governments of “psychological warfare.” Iran’s government said Sunday it was forming a working group to probe the crash and compensate victims.

President Donald Trump, who a week ago threatened to bomb Iranian cultural sites, sent a series of tweets in Farsi over the weekend expressing support for protesters and warning Iran’s leaders not to intervene. “DO NOT KILL YOUR PROTESTERS,” Trump said.

Read the article by Aoyon Ashraf and Arsalan Shahla in the Australian Financial Review.