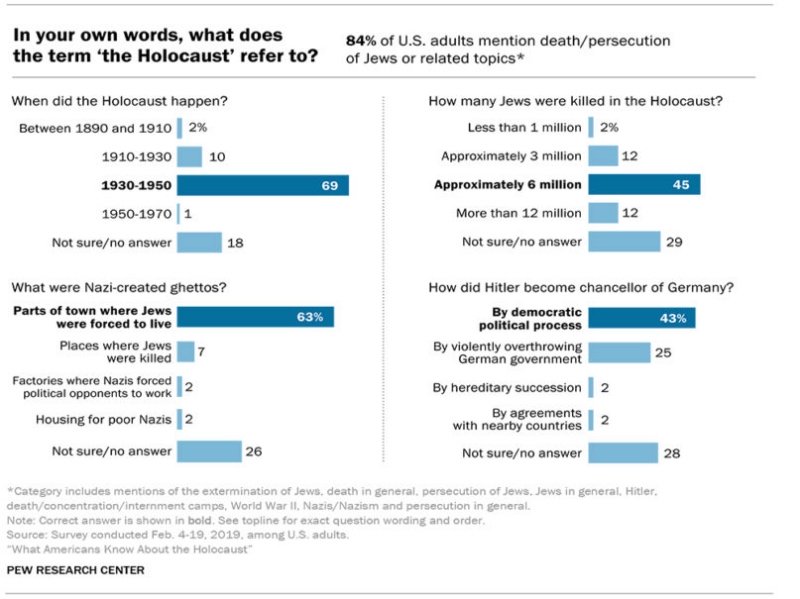 Poll: What do Americans know about the Holocaust? Some, not much

A new poll suggests Americans know about the Holocaust, the genocidal campaign against European Jews, but they’re fuzzy on the details.

Most Americans (69 per cent) know the Holocaust took place roughly between 1930 and 1950. And they know the Nazis created ghettos where Jews were forced to live (63 per cent).

But knowledge declines after that. The new Pew Research Center poll of 10,971 Americans shows that fewer than half of Americans can correctly cite the number of Jews killed in the Holocaust – six million – and even fewer correctly answered that Adolf Hitler became chancellor of Germany through a democratic political process.

The poll, which comes amid a rising tide of violent anti-Semitism and much uncertainty over its causes, was released Wednesday, days ahead of International Holocaust Remembrance Day, which falls on Monday. This year’s remembrance day also marks the 75th anniversary of the liberation of Auschwitz.

Israel is marking the event with what is billed as the largest-ever Holocaust forum, starting Thursday. Some 50 world leaders, including Vice President Mike Pence, Russian President Vladimir Putin and French President Emmanuel Macron, are expected to attend.

It is not clear, nor does the poll suggest, that ignorance of the Holocaust leads to anti-Semitism. The poll found that relatively few people polled expressed strongly negative feelings toward Jews.

Ninety per cent of non-Jewish respondents who underestimated the Holocaust’s death toll said they had either “neutral” or “warm” feelings toward Jews, while just one in 10 of that same group gave Jews a “cold” rating – a percentage not much different from the share who express “cold” feelings toward Jews, but who overestimate the number of Holocaust deaths (nine per cent).

Those who knew more about the Holocaust had relatively warmer feelings toward Jews.

Ken Jacobson, deputy national director for the Anti-Defamation League, said he was encouraged by the poll.

“I almost feel a little relieved that at least people know there was such a thing as the Holocaust,” Jacobson said.

“The fact that people don’t know details, even the obvious details, like how many Jews were murdered or much about Hitler, that’s not a reflection of attitudes toward Jews, but a reflection of how history has declined as a subject of interest in America.”

Read the article by Yonat Shimron on Sight Magazine.