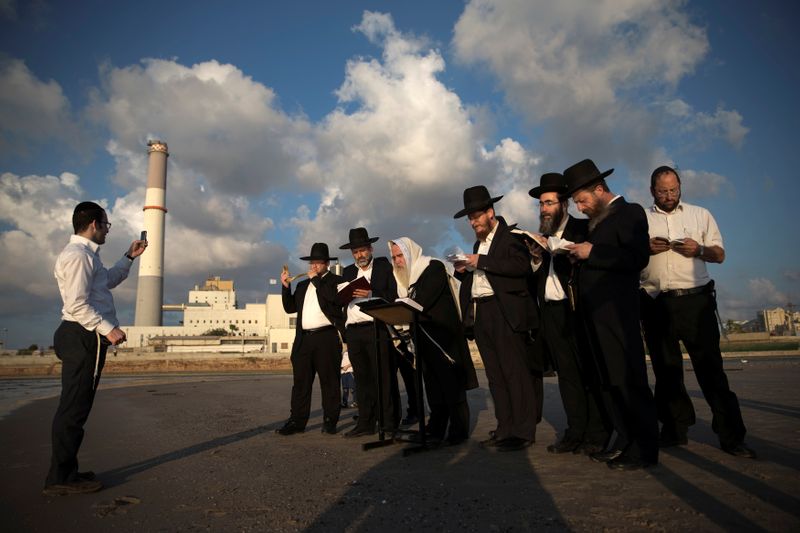 FILE PHOTO: An Ultra-orthodox Jew takes a photo with his mobile phone while others pray at a Tel Aviv beach before emptying their pockets during the Jewish New Year ritual of Tashlich, October 2, 2014. REUTERS/Finbarr O'Reilly

Israel’s religiously devout Jews, who traditionally shun the use of internet or smartphones, are increasingly going online to shop, study and video chat as the coronavirus outbreak forces them to stay largely home.

Ultra-Orthodox rabbis restrict internet use among their followers to avoid exposure to sexually explicit and other religiously objectionable material, a policy that helps to keep their communities largely isolated.

But densely populated ultra-Orthodox Jewish neighbourhoods have been particularly hard hit by the virus, with the Tel Aviv suburb of Bnei Brak forced into a complete lockdown to prevent the spread of the disease.

The result is a 40 percent surge in online traffic in these neighbourhoods since March 15, according to Bezeq, Israel’s largest telecoms group.

One company that markets solely to the ultra-Orthodox has offered deals for heavily filtered internet that will cancel automatically after the coronavirus crisis is over.

More than half of ultra-Orthodox Jews surveyed by Bezeq have increased use of digital media, while 8 percent of Bezeq’s new internet users are ultra-Orthodox, triple the normal average.

When asked whether they would continue using the internet for video calls after the crisis, 53 percent said they would.

“An existential need is leading to one of the fastest processes of internet adoption we have seen,” said Bezeq’s vice president for marketing and innovation, Keren Leizerovitch.

Read the article by Tova Cohen and Steven Scheer in iTNews.