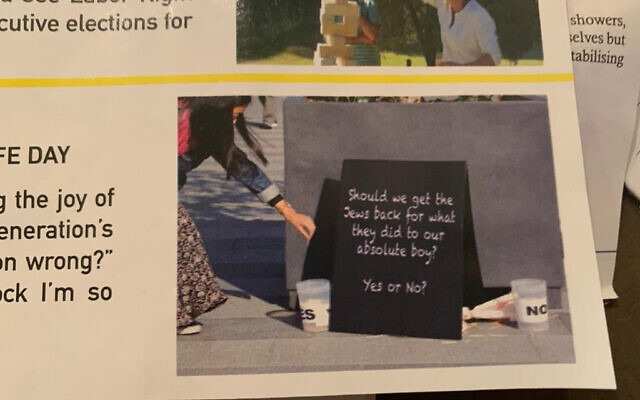 Letter from AUJS – Antisemitism is no joke

In the February 2020 ‘Welcome Week’ edition of Honi Soit, there was an insert purporting to be from the University of Sydney Union. On page 3, located next to the headline “Friday: Catholic Society presents Life Day”, an image was published of a placard bearing the words “Should we get the Jews back for what they did to our absolute boy?  Yes or No?”. Next to the placard in the image was a “Yes” jar and a “No” jar. The image depicted a student placing a vote in the “Yes” jar which was full. The “No” jar was shown as almost empty.

This image was apparently intended to refer to the antisemitic trope that “the Jews killed Jesus”. This historical falsehood, implying that all Jews, for all time, are collectively responsible for Deicide, was for centuries used as a pretext for committing unspeakable barbarities, including mass murder, against Jewish communities all over Europe and elsewhere.

The Catholic Society had nothing to do with the image. In fact, it subsequently complained publicly about having been misrepresented and vilified in Honi. Nor did the insert come from the University of Sydney Union. It was a sham created by the editors of Honi, who say it was published as an attempt to satirise the Catholic Society, and presumably also the University of Sydney Union.

Gabi Stricker-Phelps, the NSW Political Affairs Officer of the Australian Union of Jewish Students, wrote to the editors of Honi, asking them to clarify who they meant by “absolute boy”. Her letter was published in the next edition of Honi under the heading “It’s Jesus you fucking fool”. She too lodged a complaint with the University about the antisemitic nature of the image in question, as well as the personally abusive heading placed on her letter by the Honi editors.