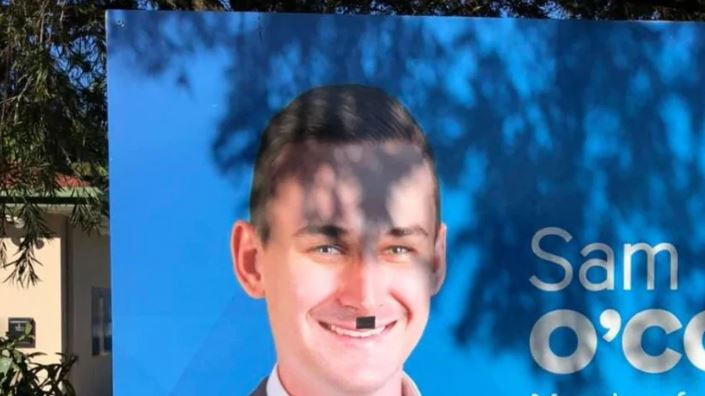 “I’ll have a laugh at most of these things. I do not take myself too seriously. But when it’s Nazi connotations, that’s a step too far.”

BONNEY MP Sam O’Connor is facing a graffiti war on his doorstep with teenagers suspected of depicting him as Adolf Hitler on signs outside his Gold Coast electoral office.

The LNP MP has challenged the teenage vandals to book a visit so he could deliver a history lesson on the Nazi regime in World War II.

“Normally I laugh about the graffiti that gets drawn on my office sign but there was several million reasons why Hitler and Nazis aren’t funny,” Mr O’Connor posted on his official Facebook page.

More than 500 people shared the post, many of them supporting Mr O’Connor’s community work around Labrador and appalled by the vandalism.

A resident in a post wrote: “I hate anything like this. I lost a sister in that (concentration) camp … brought back so many bad memories of what happened over there during the Second World War.”

Another resident wrote: “This is gross. I’m Czech, and in four days it’s the anniversary of the Lidice massacre. Would love to teach these little ferals about why my family has to run away to Australia.”

Read the article by Paul Weston in the Gold Coast Bulletin.