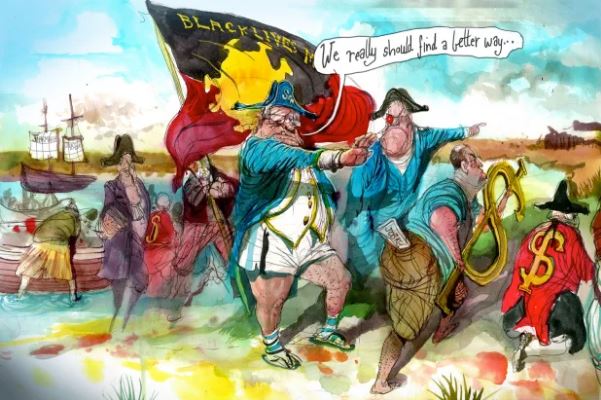 Jewish leaders are satisfied with The Australian Financial Review’s explanation that a David Rowe cartoon did not deliberately include anti-Jewish imagery even though it was interpreted that way by many readers.

NSW Jewish Board of Deputies chief executive Vic Alhadeff said he accepted the newspaper’s explanation that no offence had been intended in the depiction of Treasurer Josh Frydenberg.

Mr Frydenberg was drawn as a young sailor but depicted with a hook nose, carrying a dollar sign and appeared to wear a yarmulke, sparking concern the cartoon was reinforcing anti-Semitic tropes given the Treasurer’s Jewish faith.

Rowe explained he used the hook nose for many faces of politicians, the dollar sign was a symbol used often to depict treasurers and business people and Mr Frydenberg was wearing a cloth sailor’s cap, not a yarmulke.

Nevertheless, Rowe apologised for any hurt unintentionally caused and amended and republished the cartoon to remove the cloth cap and change Mr Frydenberg’s nose.

Mr Alhadeff said a significant number of Jewish community members had contacted him over the weekend over the cartoon, which he said played into both overt and sub-conscious bias against Jews.