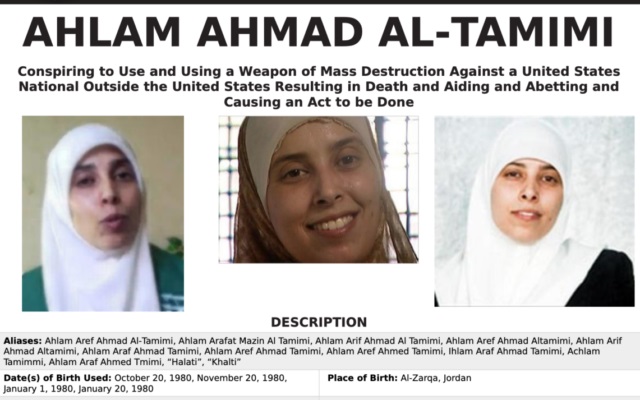 US considers withholding aid to Jordan to force extradition

Washington: The Trump administration is considering withholding aid to one of its closest Arab partners, Jordan, in a bid to secure the extradition of a woman convicted in Israel of a 2001 bombing that killed 15 people, including two American citizens.

The administration says it’s weighing “all options” to press Jordan to extradite Ahlam Aref Ahmad al-Tamimi, who is wanted by the US on a charge of conspiring to use a weapon of mass destruction against American nationals. The charge was filed under seal in 2013 and announced by the Justice Department four years later.

The extradition issue is likely to be raised this week when Jordan’s King Abdullah II speaks to several US congressional committees to voice his opposition to Israel’s plans to annex portions of the West Bank.Tamimi is on the FBI’s list of “most wanted terrorists” for her role in the suicide bombing at a crowded Jerusalem pizzeria. It was one of the deadliest attacks during the second Palestinian uprising.

She has lived freely in Jordan since Israel released her in a 2011 prisoner swap with the militant group Hamas. Jordanian authorities have rebuffed US requests to turn her over, despite an extradition treaty. Jordan has a large Palestinian population and it’s unclear if a threat over aid would cause it to rethink its position.

Ahead of King Abdullah’s video congressional appearances, scheduled for Wednesday with the US Senate Foreign Relations and House Foreign Affairs committees, the US State Department said that billions of dollars of foreign assistance could be used as leverage to get Jordanian authorities to extradite Tamimi.

Read the article in The Sydney Morning Herald, Brisbane Times and The Age (AP).

Watch this video that calls upon Jordan to extradite Tamimi to the United States.