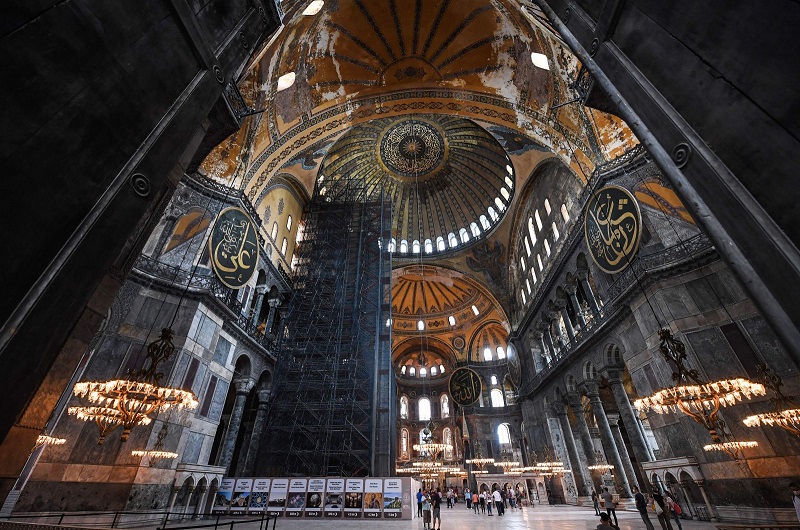 The Muslim practice of taking over churches and either eliminating their Christian features, or letting them go to ruin, is a particularly cynical practice, which is not only an act of religious triumphalism, but it has robbed the world of some of the most beautiful works of art.

A major act of cancel culture is happening right now and most of the people involved in the movement that is toppling statues across America and Britain and defacing them in Australia have not noticed or cared.  And those that have are probably cheering from the side lines, since it strikes a blow against Christianity.

Hagia Sophia, built in the 6th Century as the Cathedral of Constantinople, which stood as the world’s largest cathedral for a thousand years, is about to be ‘cancelled’ yet again by the Muslim powers that converted it into a mosque in the 15th Century.  At that time, its extensive and beautiful mosaics depicting the Christian holy family and the saints were plastered over when they were not entirely destroyed, and the iconostasis, the altar and bells were removed.  Islamic features such as the minarets were added and large black rondelles with verses from the Koran were hung from upper beams and cornices into the space.

In the early 20thC when Kamal Ataturk led the country in a secularising revolution, which demoted the theocratic rulers and separated church and state, Hagia Sophia re-emerged from neglect and the space was turned into a museum, a tourist attraction for Christian and Muslim visitors alike, and everyone else with an interest in history, religion and art.  By decree, it would no longer serve as a sanctuary for Muslim prayer, which allowed some of the mosaics to be uncovered. Ataturk was hailed in the Western world as a man who acted with the wisdom of Solomon, or more accurately, Sophia, the Greek word for wisdom, after which the Church was named.

Read the piece by Rachael Kohn on her blog.