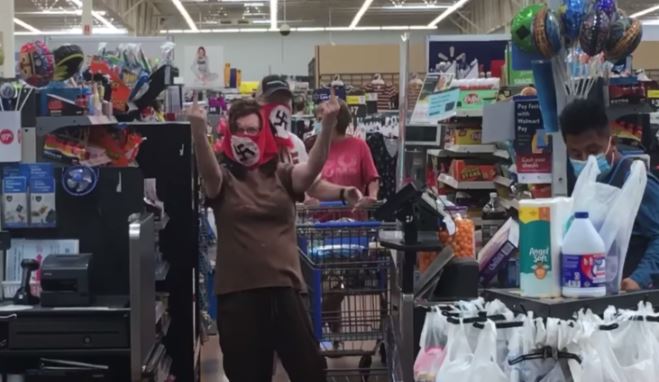 Despite the months of pundits and reporters arguing that wearing a face mask shouldn’t be a political statement, there’s a select few arseholes who think taking basic measures to keep the current global pandemic from raging on is an affront to their civil liberties, rather than, y’know, common courtesy

Then, there’s the people who actually try to turn it into a political statement in all the wrong ways. Case in point: yesterday, Minnesota resident Raphaela Mueller snapped a now viral video of two Walmart shoppers who responded to the chain’s mandatory mask policy by wearing masks featuring the Nazi flag. When Mueller’s partner, Benjamin Ruesch, called the pair “sick,” they flipped him off.

While Walmart’s been mandating mask-wearing since July 20, the state of Minnesota only begrudgingly began enforcing their own mandate this past weekend, requiring that a mask or face covering be worn in businesses and “indoor public spaces.” This comes after close to five thousand folks in the state have been diagnosed with covid-19 since the first local case was documented back in March, with more than 1,600 of those cases being fatal. The same weekend that Mueller was being flipped off in her local Walmart, the state reported thirteen deaths from the disease.

But more dangerous than that, according to the pair being filmed, is the creeping threat of communism that a mask mandate represents. “I’m trying to tell people what’s going to happen in America,” the woman in the video said. “If you vote for Biden, you’re going to be living in Nazi Germany. That’s what it’s going to be like.”

As her fellow swastika-wearing comrade finished checking out behind her, he added that we’re all “living under a socialist state,” while paying for a trip picking up what looks like a tub of cheese puffs, a bottle of Pepsi, and a loaf of white bread, along with a few rolls of toilet paper.

Read the article by Shoshana Wodinsky in Gizmodo.