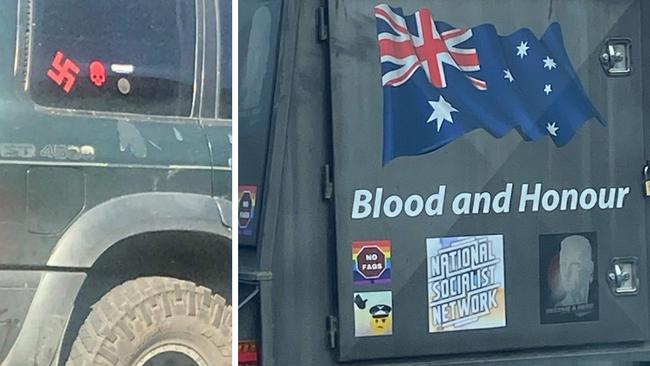 A trailer, covered in Nazi and white supremacist stickers, has been spotted being towed on the Tullamarine Freeway.

The Melburnian who captured a photo of the trailer in Brunswick at 12.40pm, Thursday April 15, said he was “lost for words”.

The trailer had stickers featuring an emoji in an SS uniform doing a Hitler salute, a rainbow ‘no f-gs’ sticker, and National Socialist Network sign plastered under the Australian flag and the phrase ‘blood and honour’ — a political slogan used by Hitler Youth.

This was not the only recent sighting of Nazi imagery on Victoria’s roads.

A Bendigo driver became distressed when they noticed the red swastika and a matching skull sticker on the window of a 4WD at the California Gully McDonald’s drivethru in Bendigo on Saturday, April 17.

Dr Abramovich said the largely Melbourne-based neo-Nazi groups were on a “recruiting campaign” in the country.

“They’re of the opinion that regional Victoria is a fertile ground,” he said.

Read the article by Zizi Averill in the Herald Sun.