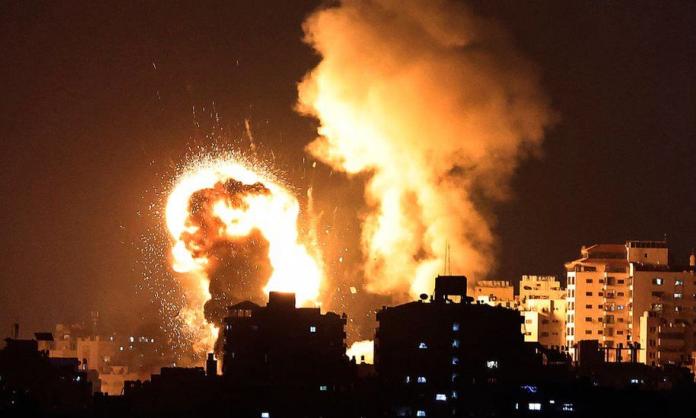 Twenty Palestinians, nine of them children, were killed in Israeli bombing attacks in the Gaza Strip on Monday night.

This came at the end of a day of violence that began in occupied East Jerusalem, where Israeli forces assaulted worshippers at the al-Aqsa mosque compound, injuring hundreds.

Scenes of brutality in Jerusalem generated outrage and solidarity among Palestinians and around the world.

The military wing of the Palestinian resistance organisation Hamas issued an ultimatum giving Israel an hour—until 6 pm local time—to withdraw its forces from al-Aqsa and the occupied East Jerusalem neighbourhood of Sheikh Jarrah, and free detainees.

When the deadline passed, resistance groups in Gaza fired volleys of rockets towards Jerusalem for the first time since the summer 2014 war, prompting celebrations from some Palestinians.

Israelis who had been gathering for the so-called Jerusalem Day march ran for cover as sirens sounded.

No serious Israeli casualties were reported.

A Hamas spokesperson in Gaza said that resistance fighters “fired rockets at occupied Jerusalem, in response to the enemy’s crimes and aggression against the holy city, and its abuse of our people in Sheikh Jarrah and al-Aqsa mosque”.

“Israel will respond with great force”, Israeli Prime Minister Benjamin Netanyahu said, adding that “whoever attacks us will pay a heavy price”.

Such warnings should be understood as threats of collective punishment against civilians in Gaza.

Israeli ministers approved an aerial offensive against the territory, with an Israeli military spokesperson saying that the assault “will take a few days”.

Read the article by in Red Flag (Ali Abunimah, Maureen Clare Murphy and Tamara Nassar report for the Electronic Intifada on Israel’s latest murderous onslaught in Gaza, the ongoing ethnic cleansing of occupied East Jerusalem and the mass resistance of Palestinians in response).