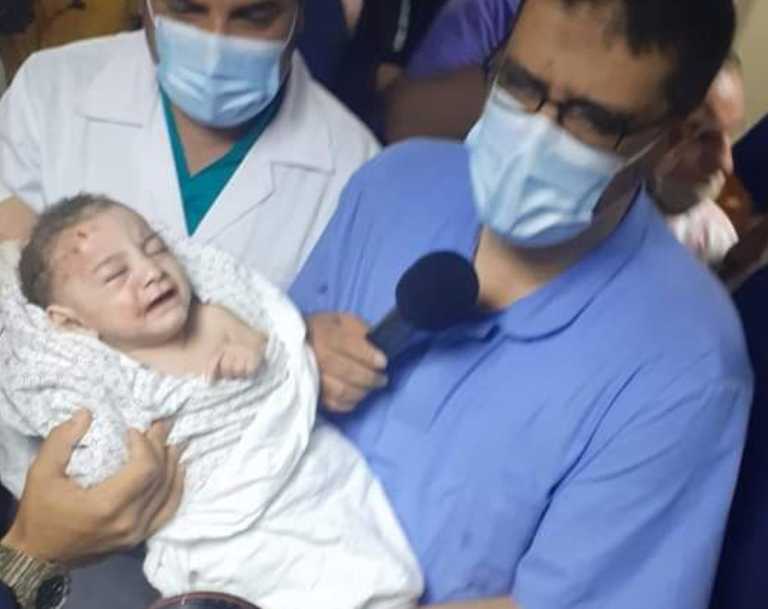 Baby only survivor after family massacred

A Palestinian family of six members, save a months old baby, was massacred late on Friday night by Israeli warplanes that hit their home in Al Shati refugee camp in East Gaza City.

Israeli F16 fighter jets bombed with a heavy barrage of missiles the three-storey home of the Abu Hatab family killing at least four children and their mother.

The baby, whose mother and older siblings were all killed, miraculously survived and was plucked from the wreckage.

The male infant was believed to have since undergone surgery for his injuries.

The bombing of the Abu Hatab house also injured 25 other Palestinian civilians in neighbouring homes.

Civil defence teams were searching under the debris of the destroyed Abu Hatab home for any further casualties.

The death toll from the Israel-Palestine conflict is continuing to rise at an alarming rate, with the Israeli military accused of “full-fledged war crime”.

Palestinian fatalities from air strikes on Gaza have now reached 137, including 31 children, with more than 950 people injured.

There are fears this number will reach new heights after another series of air strikes from Israel hit the Shati refugee camp in Gaza.

At least two women and six children were killed in the strike, with several others buried under the rubble.

“The massacre committed by the occupation against civilians in the Al-Shati refugee camp is a full-fledged war crime and reflects the ugliness of the terror practised by the Zionist entity against our people,” Qassem said.

Read the article in the Daily Mercury.