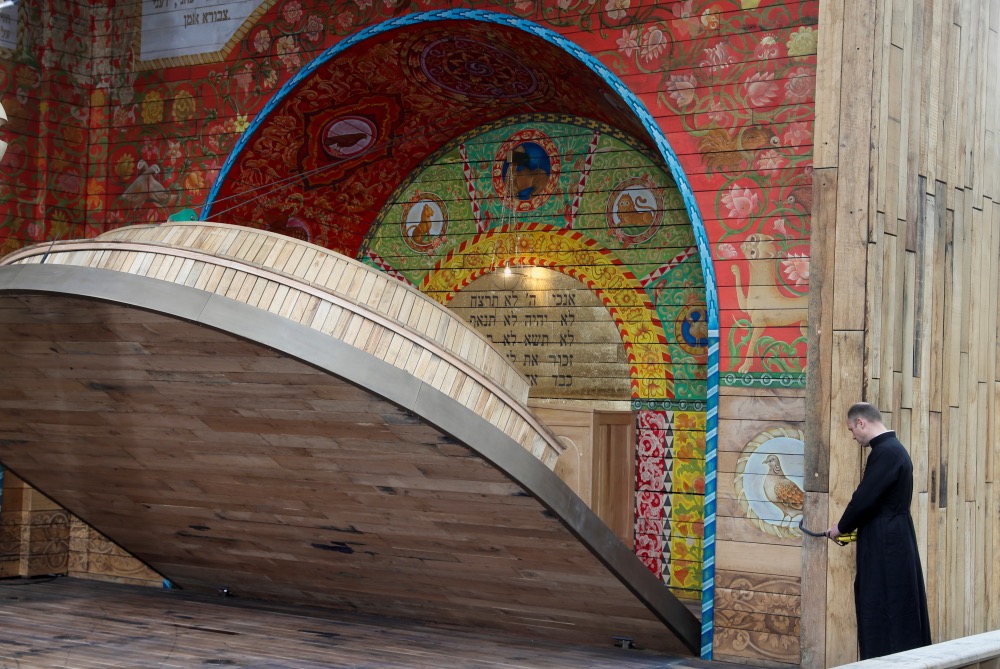 A view of a symbolic synagogue, in the form of a collapsible wooden structure, commemorating the victims of Babyn Yar (Babiy Yar), one of the biggest single massacres of Jews during the Nazi Holocaust, during the opening ceremony, in Kyiv, Ukraine May 14, 2021. REUTERS/Gleb Garanich

Ukraine unveiled on Friday a synagogue built of wood and designed to unfold like a pop-up book at a site commemorating the victims of one of the single biggest massacres of Jews during the Nazi Holocaust.

The colourful new synagogue is part of a memorial project for the victims of the Babyn Yar massacre that marked the start of the Holocaust in occupied Soviet Ukraine, in which a pre-war Jewish population of about 1.5 million was virtually wiped out.

Nazi German forces shot dead an estimated 34,000 Jewish men, women and children on 29th to 30th September, 1941, in a large ravine called Babyn Yar on the edge of the Ukrainian capital Kyiv. The ravine is also known as Babi Yar.

The opening of the synagogue coincided with Ukraine marking on Friday its first Day of Remembrance for Ukrainians who saved Jews during World War Two.

“Their feat is an example of humanity and self-sacrifice,” President Volodymyr Zelenskiy said on Twitter.

The structure of the Swiss-designed synagogue can be collapsed using a hand winch. In its expanded form, it has a retractable roof, balcony and benches, and its walls are decorated with prayers and blessings.

Its creators wanted to remind visitors of a prayer book, a Bible, or the magic of a pop-up book where “new worlds unfold, that we could not imagine before.