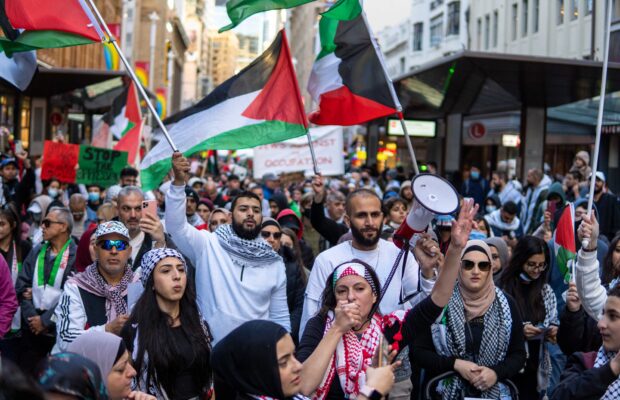 “From the river to the sea, Palestine will be free”: Thousands commemorate Al Nakba

Protests were held in major cities, marking 73 years since the forced expulsion of Palestinians from their land.

Thousands gathered outside Sydney’s Town Hall on Saturday amid a sea of red, black and green to condemn the colonial subjugation of Palestinians, and to advocate for their right to self-determination.

At least 145 Palestinians, including 41 children, have been killed in the Gaza Strip since Monday while at least 10 people in Israel have also been killed.

Protests were held in major cities across the continent. marking 73 years since Al Nakba, or the ‘day of catastrophe,’ which marked the forced expulsion of Palestinians from their land.

Advocates united with flags and placards to condemn Israeli violence towards Palestine. In the past week, Israeli airstrikes and attacks have resulted in the deaths of hundreds of civilians, several of whom are children.

Israeli military attacks in the Gaza strip persist as the UN reports 10,000 Palestinians being forced out of their homes in Gaza, as well in the occupied West Bank. Forced evictions in Sheikh Jarrah are also occurring in the wake of a comprehensive report by Human Rights Watch, accusing Israel state of “systematic domination” and apartheid against Palestinians.

Chants could be heard ringing through Town Hall before the rally’s commencement, including:

“From the river to the sea, Palestine will be free”

Read the article by by Amelia Raines in Honi Soit.