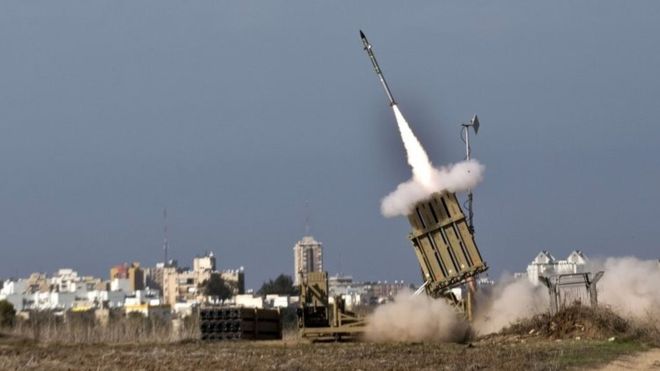 What is Israel’s Iron Dome?

The lights split apart the night sky over Israel and Gaza – rockets and answering interceptor missiles exploding overhead in a shower of sparks, like alien warships doing battle. The violence between Israel and Palestine is now the worst seen in years – air strikes from Israeli warplanes have killed hundreds of Palestinians in densely populated Gaza, while a barrage of rockets fired by Gaza’s militant group Hamas is testing Israel’s Iron Dome missile defence shield.

Israel’s Iron Dome is a mobile defence system designed to take out short-range rockets fired up to 70 kilometres away, no matter the weather. It was brought in a decade ago with US funding help – a big-tech solution to the low-tech rockets built by Hamas in the streets and tunnels of Gaza, and one part of Israel’s sweeping security apparatus of surveillance drones and checkpoints that monitor the 2 million Palestinians blockaded inside Gaza.

But it’s not really a giant dome over Israel, right?

No. The dome is actually a roving group of “batteries” or equipment units – radars, computers and missile packs – on wheels. Radars listen for incoming rockets nearby and feed that data to the computers to analyse the rockets’ trajectory and model. If they’re headed for uninhabited land, the AI won’t recommend taking a shot. But if a rocket is on course for people or property, then an interceptor missile will be fired to explode just in front of it, taking it out in the fireball. The units, including the interceptors, move around to cover more ground and keep their location secret.

Read the explainer by Sherryn Groch in The Sydney Morning Herald.