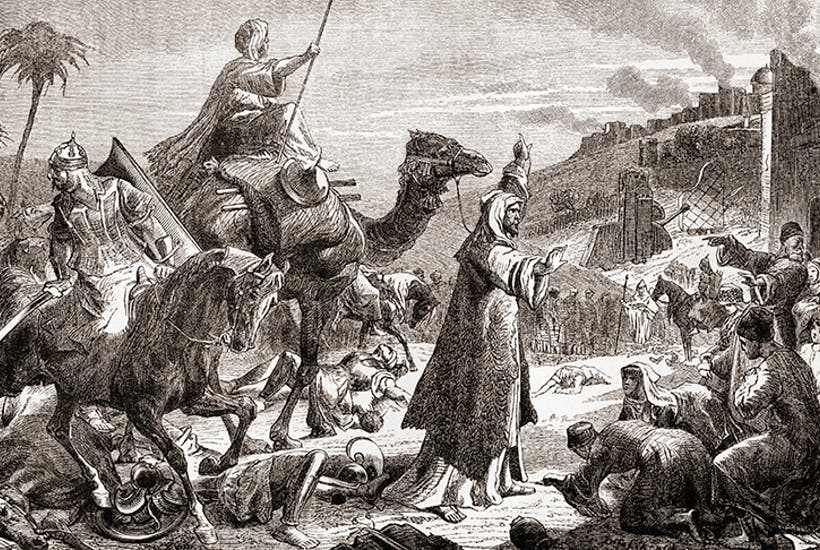 The empire that sprang from nowhere under the banner of Islam

When the British formed the basis of their empire in the 1600s by acquiring territories in India and North America, they already had many centuries’ experience of foreign involvement. One of the most remarkable aspects of the force that reshaped Eurasia 1,000 years earlier is that there was no prelude: the Arab conquests, and the Islamic empire that they created, came out of nowhere. By the time of the death of the Prophet Mohammed in 632 most of the tribes of the Arabian peninsula had united under the banner of Islam, some out of faith, others from expediency. But few people outside Arabia knew who Muslims were or worried about the threat they might pose.

There were two significant forces in this part of the 7th-century world: the Byzantines in Constantinople and the Persians on the Tigris river at Ctesiphon, south of Baghdad. These were, as one contemporary chronicler called them, the ‘two eyes of the world’. Imagine the shock just four years after Mohammed’s death when some 20,000 Arab fighters destroyed a Byzantine army of almost ten times their number near the sea of Galilee. By the end of 636, the holy city of Jerusalem was besieged. Long sacred to Jews and Christians, Jerusalem was also revered by Muslims because of the Prophet’s miraculous night journey; it was towards Jerusalem, not Mecca, that early Muslims prayed. In the spring of 637, the Patriarch Sophronius, whose home city of Damascus had already fallen to Arab arms, attempted to stall the inevitable by insisting he would only hand over the keys of Jerusalem to the caliph. More surprise, then, when the caliph Umar duly arrived on a camel, simply dressed. Even more when he refused to pray in the Church of the Holy Sepulchre — in spite of Jesus being a prophet in Islam — because he knew that if he did so, his followers would turn the church into a mosque. Instead, he and his successors built the Dome of the Rock and the Al Aqsa mosque, the scene of current conflict. There were yet more surprises to come.

Read the book review by Anthony Sattin in the Spectator.