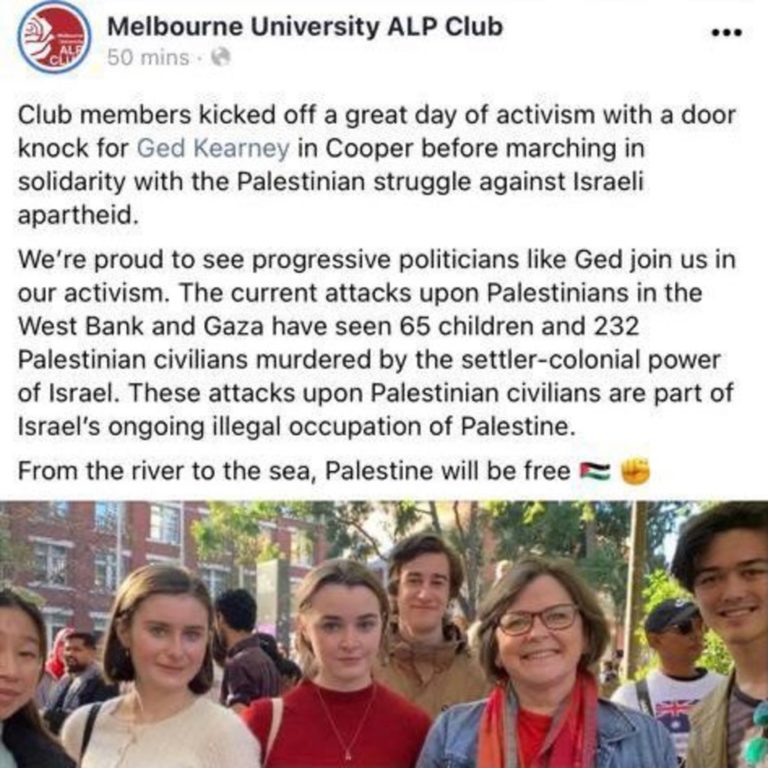 ‘From the river to the sea’: Labor’s havoc over Palestine and Israel

It was a little-seen social media post that sent a major wave of panic through federal Labor.

The Melbourne University ALP Club posted a photo of a handful of its members alongside Labor MP Ged Kearney, at a May 22 rally in solidarity for the people of Palestine. It was accompanied by the phrase “From the river to the sea, Palestine will be free”.

It is a slogan that has become deeply inflected by antisemitism and since Hamas took power in Gaza more than 15 years ago has been used as a call for the driving out of all Jews from the region.

While the page only has 1000 followers, the post was very quickly and widely circulated among many Labor members, MPs and the people within the Jewish community.

A sheepish Kearney had attended the march but told colleagues she did not endorse the wording of the post and had no idea the photo would be used for that purpose. After a flurry of phone calls it was removed and members of the group conceded they’d been ignorant to the true meaning of the phrase.

Federal Liberal MPs, such as Alan Tudge, took to their social media pages calling the post “a disgrace” and stating the ALP was “now overtly supporting the end of Israel”.

[Editor: Labor MP Ged Kearney took to the floor of the parliament to tout her support for Palestinianism.]