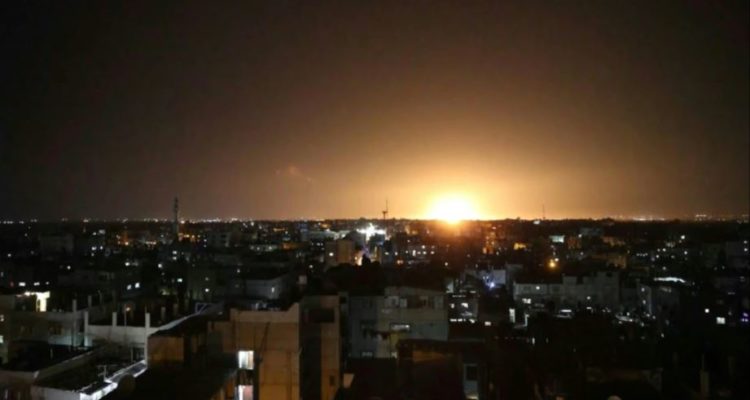 An explosion lights up the night sky in Khan Yunis, as Israeli forces shell the Palestinian enclave in retaliation.

The air strikes on the Palestinian enclave of Gaza were the first under Israel’s new government headed by Naftali Bennett, whose ideologically disparate coalition on Sunday ousted long-serving prime minister Benjamin Netanyahu.

Tensions also rose again in the occupied West Bank, where the Israeli army said they shot a Palestinian woman, alleging she had attempted to ram soldiers with a car and then stab them.

Tensions in east Jerusalem, culminating in Israeli police repeatedly clashing with Palestinian worshippers in the Al-Aqsa mosque compound, were the trigger for last month’s 11-day conflict between Gaza’s Islamist rulers Hamas and Israel.

There was no indication of any casualties.

In Israel, 13 people were killed in last month’s conflict, including a soldier, by rockets and missiles fired from Gaza, the police and army said.

In the West Bank on Wednesday, a Palestinian woman was shot after attempting to drive into Israeli soldiers in a car and attack them with a knife near Hizma, south of Ramallah, the military said.

Official Palestinian news website Wafa identified the woman as Mai Afana, 29, from the town of Abu Dis, just outside Jerusalem.

The previous day saw more than a thousand Israelis bearing their national flag take to the streets of east Jerusalem in a delayed and controversial march by nationalist and far-right activists.

Read the article in The Australian (AFP) and Herald Sun.