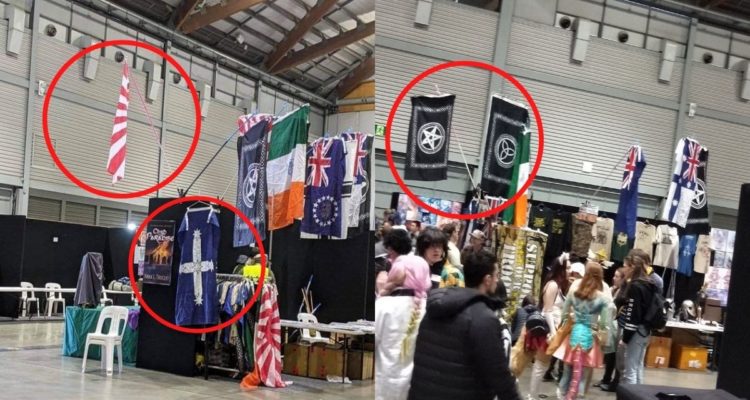 Nazi propaganda was available for sale for a day at the Supanova festival in Sydney before the stall owner was booted.

According to an artist and Twitter user who wishes to be anonymous and has set their Twitter profile to private, a stall set up at booth 54 of the artist hall was spotted during set up on Friday evening with “rising sun flags and swastikas, fascist statements and shirts being proud of ‘Christian, heterosexual, pro-gun, conservative identity.’”

“Immediately people in the alley were upset and uncomfortable, and upon alerting staff [were] told that [they, the owner behind the stall] was apparently banned and have apparently applied under a new name,” they wrote in a thread about the stall at Sydney’s Supanova.

“We were then told they would be removed and the situation dealt with.

In photos shared in the thread, the stall featured shirts with army imagery, a flag with the words, “Pink fascism out of oz” and a bloody middle finger, and a giant Eureka Flag. The Eureka Flag, in particular, is a common symbol for nationality and radicalism used by all sorts of political groups including communists and neo-Nazis alike.

While it has original grassroots in worker’s rights organisations, its sybolism has recently been co-opted by radical right-wing groups after parts of it were used in a banner in an anti-Chinese riot, which is where it became a radical and racist connotation in the public view, according to the NSW Migration Heritage website.