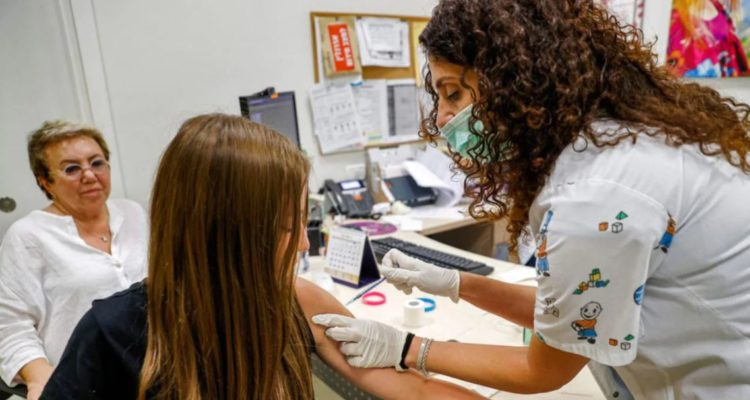 A teenager receives a dose of the Pfizer vaccine in Holon near Tel Aviv last week. (AFP)

The Delta variant is sending ­Israel back to the future. Ten days after the country lifted the requirement to wear masks indoors, they’re back. So are the corona­virus cabinet meetings. Covid-19 testing sites are being reopened. Tourists and pilgrims, vital to ­Israel’s economy, were meant to return at the end of this week, but that reopening has being delayed for another month.

The reason is a jump in Covid infections in the past week, which occurred despite Israel being one of the most highly vaccinated countries in the world.

Israel had prided itself on reaching herd immunity, after about 65 per cent of the population – over 80 per cent of Israelis aged over 16 – received two doses of the Pfizer vaccine.

But the Delta variant has driven a surge in cases, with more than 100 people testing positive each day for six days in a row. This variant, first identified in India, is highly contagious. It has become the dominant strain in the UK in the space of about two months. The Delta variant is the source of the infection spreading in Australia, where only about 4.7 per cent of the population has been fully vaccinated although over 27 per cent have received the first shot.

This variant entered Israel via its international airport, brought in by Israelis returning from “red list” countries including India, Russia and Brazil. These were supposedly banned destinations, but airport figures show that 4874 Israelis flew in from Moscow last month, with 31 of them testing positive for Covid. “It turns out that the ban on flying to these countries, which the previous government decided on, did not include any effective enforcement,” said Israel’s new Health Minister, Nitzan Horowitz, vowing to close this loophole.