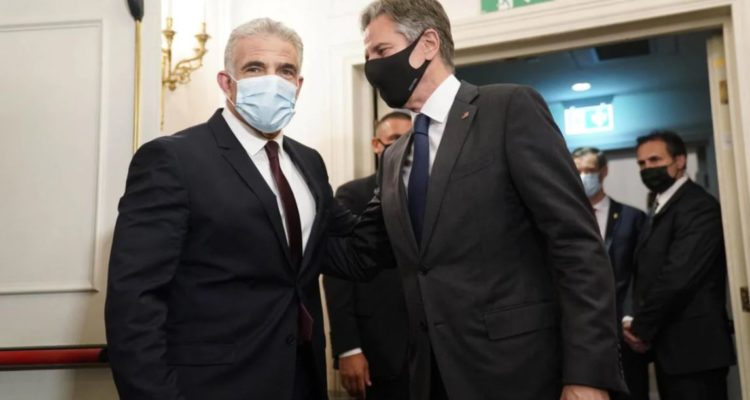 Israel’s foreign minister on Sunday voiced concern over US diplomacy with Iran but promised a less confrontational approach, in the new government’s first high-level talks with the Jewish state’s closest ally.

Foreign Minister Yair Lapid, a centrist who masterminded a coalition that this month unseated veteran right-wing leader Benjamin Netanyahu, flew to Rome to meet US Secretary of State Antony Blinken who is on a European tour.

Mr Lapid said he was ready to work with the US to minimise conflict with the Palestinians following bloodshed last month — but made clear his worries about President Joe Biden’s push to rejoin a nuclear agreement with Iran.

“Israel has some serious reservations about the Iran nuclear deal that is being put together in Vienna,” Mr Lapid said as he opened talks with Mr Blinken at a hotel in the Italian capital.

“We believe the way to discuss those disagreements is though direct and professional conversation, not in press conferences.”

Mr Lapid did not mention Mr Netanyahu by name but drew a clear contrast with the former Israeli leader, who openly aligned himself with the rival Republican Party as former US president Barack Obama negotiated the Iran deal in 2015.

“In the past few years mistakes were made. Israel’s bipartisan standing was hurt. We will fix those mistakes together,” he said.

Read the article by Shaun Tandon in The Australian.