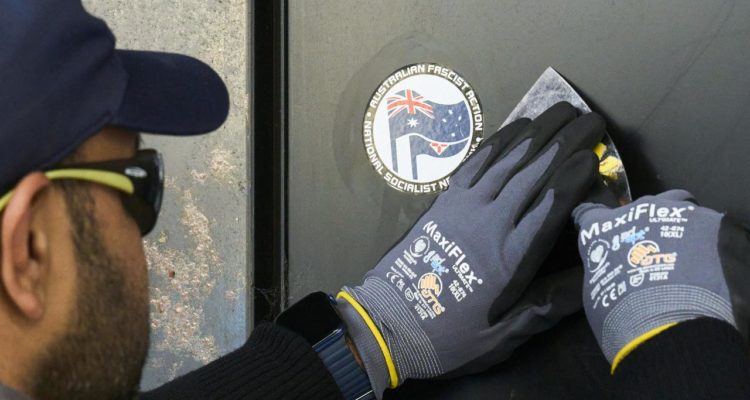 Racist stickers bearing the logo of a neo-Nazi group have been placed around Rundle Mall on the first day of NAIDOC Week.

Shopfronts on Rundle Mall have been targeted by racist vandals on the first day of NAIDOC Week.

Small, round stickers bearing the name and symbol of neo-Nazi group National Socialist Network were placed on shops and phone booths on Monday morning.

One sticker read “we must secure the existence of our people and a future for white children”, while another read “white revolution is the only solution”. Others contained the group’s flag alongside the Australian flag.

“To see this sort of thing appear is inappropriate and very offensive,” Mr Stevens said.

Opposition Aboriginal Affairs spokesman Kyam Maher said it was a disappointing start to a week that celebrates Aboriginal and Torres Strait Islander people.

“It’s extremely disappointing and upsetting on a week where we celebrate tens of thousands of years of Australia’s rich Aboriginal history and culture to see these sorts of attitudes being publicly displayed,” he said.

“Australia is a remarkable multicultural community and I think these sorts of public displays have no place here.”

Read the report by Kathryn Bermingham in The Advertiser.