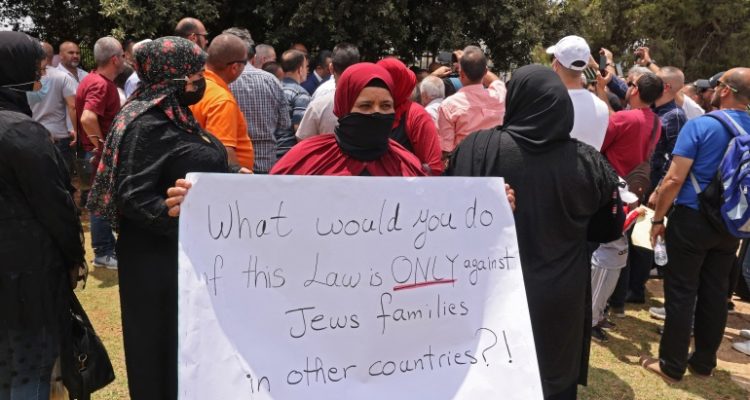 A woman holds up a sign against Israel's controversial Citizenship and Entry law, during a demonstration by Israeli Arabs ahead of a vote by the Knesset (Israeli parliament) on the legislation, outside the Knesset building in Jerusalem on July 5, 2021. (Photo by Menahem KAHANA / AFP)

Jmedia Manager
Print
July 7, 2021 81
A ban in force since 2003 on Arab citizens and residents of Israel extending their rights to their Palestinian spouses came to an end on Tuesday after lawmakers failed to extend the controversial measure.

Prime Minister Naftali Bennett’s request to prolong the ban had divided his disparate coalition with both Jewish left-wingers and Arab conservatives strongly opposed.

The outcome underlined the wafer-thin majority Bennett’s coalition commands in the 120-seat parliament.

The ban first enacted during the second Palestinian intifada, or uprising, had been justified by supporters on security grounds but critics derided it as a discriminatory measure targeting Israel’s Arab minority.

A substantial number of those affected live in annexed east Jerusalem and therefore have Israeli residency, without necessarily being citizens of the Jewish state.

This article appeared in The Australian (AFP).