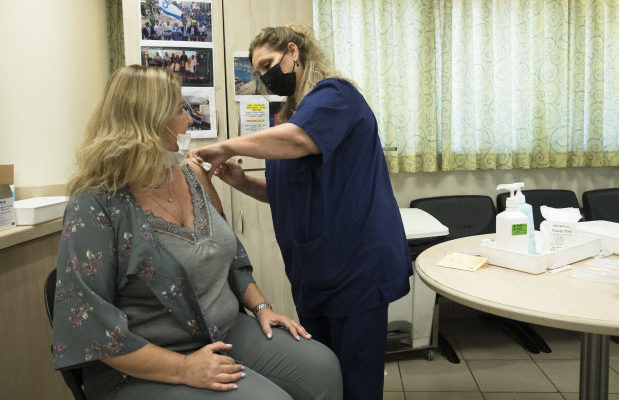 A woman receives her third dose of the Pfizer vaccine at Sheba Medical Centre in Ramat Gan, Israel. (Getty)

Jerusalem | Israel’s Prime Minister on Thursday (Friday AEST) announced that the country would offer a coronavirus booster to people over 60 who had already been vaccinated.

The announcement by Naftali Bennett makes Israel, which launched one of the world’s most successful vaccination drives earlier this year, the first country to offer a third dose of a Western vaccine to its citizens on a wide scale.

“I’m announcing this evening the beginning of the campaign to receive the booster vaccine, the third vaccine,” Mr Bennett said in a nationally televised address. “Reality proves the vaccines are safe. Reality also proves the vaccines protect against severe morbidity and death. And like the flu vaccine that needs to be renewed from time to time, it is the same in this case.”

The decision comes at a time of rising infections and signs that the Pfizer vaccine’s efficacy dwindles over time.

Anyone over 60 who was vaccinated more than five months ago will be eligible. Mr Bennett said Israel’s new president, Isaac Herzog, would be the first to get the booster on Friday. It will also be offered to the general public.

Mr Bennett, who is 49, said his first call after the news conference would be to his mother to encourage her to get her booster shot.

Neither the US nor the EU have approved coronavirus booster shots. It is not yet proven if a third dose helps and, if so, who needs one and when.

But Mr Bennett said a team of expert advisers had agreed overwhelmingly, by a 56-1 margin, that it made sense to launch the booster campaign. He said the recommendation was made after “considerable research and analysis” and that its information would be shared around the world.

Read the article by Ilan Ben Zion in the Financial Review.