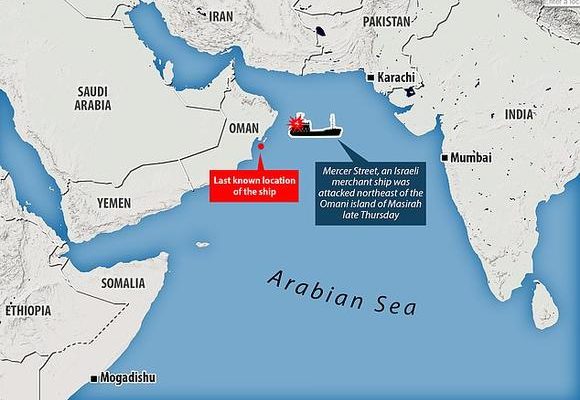 Dubai: An attack on an oil tanker linked to an Israeli billionaire killed two crew members off Oman in the Arabian Sea, authorities said, marking the first fatalities after years of assaults targeting shipping in the region.

No one immediately claimed responsibility for the Thursday night raid on the Liberian-flagged tanker Mercer Street. However, a US official said it appeared a so-called suicide drone was used in the attack, raising the possibility that a government or a militia group was behind it. Without providing any evidence, an Israeli security official said that Israel believes Iran was behind the attack on the ship, citing similar attacks in the past.

The US Navy rushed to the scene following the attack and was escorting the tanker to a safe harbour, a London-based ship management company said on Friday.

The assault represented the worst-known maritime violence so far in regional attacks on shipping since 2019. The US, Israel and others have blamed the attacks on Iran amid the unravelling of Tehran’s nuclear deal with world powers. Iran now appears poised to take an even tougher approach with the West as the country prepares to inaugurate a hard-line protege of Supreme Leader Ayatollah Ali Khamenei as president next week.

The attack on Thursday night targeted the tanker just north-east of the Omani island of Masirah, more than 300 kilometres south-east of Oman’s capital, Muscat.

London-based Zodiac Maritime, part of Israeli billionaire Eyal Ofer’s Zodiac Group, said the attack killed two crew members, one from the United Kingdom and the other from Romania. It did not name them, nor did it describe what happened in the assault. It said it believed no other crew members on board were harmed.