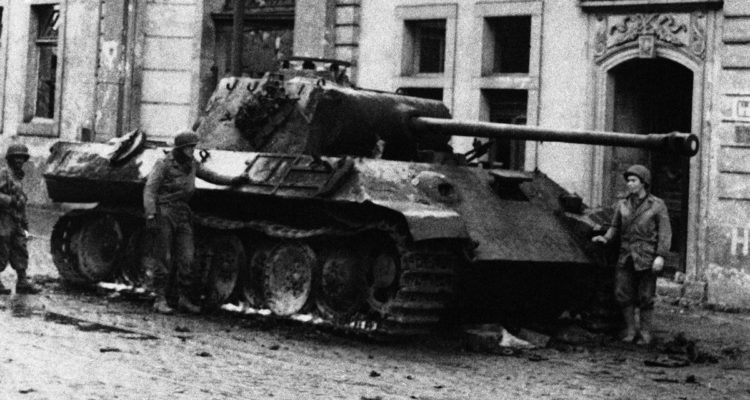 U.S. infantrymen inspect a burned-out Panther tank in front of the Beethoven Hall in Bonn, Germany on March 12, 1945. (Associated Press)

An 84-year-old man in Germany has been hit with heavy fines after a Nazi-era tank and other weapons from World War II were discovered in his garage, according to a report from Germany’s DPA news agency. The tank and assorted weapons were uncovered after a tipster told authorities there might be art stolen during World War II in the man’s possession.

The man’s lawyers argued that the tank couldn’t be operated and pointed to the fact that it didn’t even have treads anymore. But the court found he was still in violation of the War Weapons Control Act.

The elderly man claimed to have purchased the 36 T Panther tank in England and insisted it was just “scrap metal,” but it’s illegal in Germany to own tanks, weapons, and ammunition that would be considered instruments of war.

Automatic and semi-automatic weapons are illegal in Germany but many other guns can still be owned legally.

The man has been given two years to find a museum willing to purchase the tank, and apparently an unnamed U.S. institution is interested, according to the BBC.

Read the article by Matt Novak on Gizmodo.