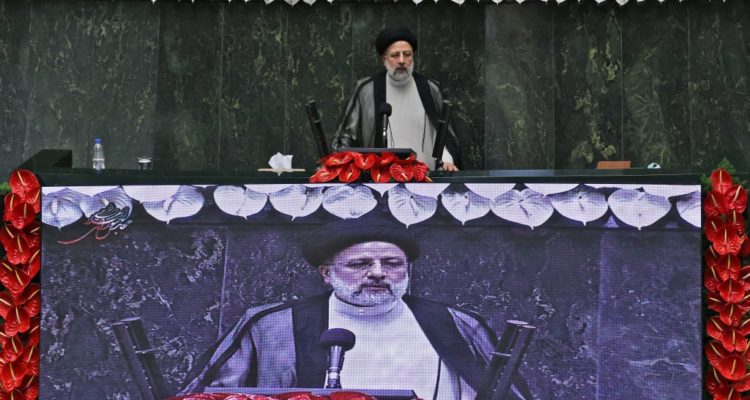 Iran's newly elected President Ebrahim Raisi speaks at his swearing in ceremony at the Iranian parliament in the capital Tehran on August 5, 2021. - Raisi takes the oath before parliament today with Iran facing an economy battered by US sanctions, a grinding health crisis and thorny negotiations on its nuclear programme. (Photo by Atta KENARE / AFP)

Tehran: The protege of Iran’s supreme leader, Ebrahim Raisi, was sworn in as the country’s new President during a ceremony in parliament on Thursday (Friday AEST), an inauguration that completes hard-liners’ dominance of all branches of government in the Islamic Republic.

The former judiciary chief known for his distrust of the West takes the reins at a tense time. Iran’s indirect talks with the US to salvage Tehran’s landmark 2015 nuclear deal have stalled, as Washington maintains crippling sanctions on the country and regional hostilities simmer.

“The sanctions must be lifted,” Raisi said during his half-hour inauguration speech. “We will support any diplomatic plan that supports this goal.”

Wearing the traditional black turban that identifies him in the Shiite tradition as a direct descendant of Islam’s Prophet Muhammad, Raisi recited the oath of office with his right hand on the Quran.

In his address, Raisi stressed his embrace of diplomacy to lift US sanctions and mend rifts with neighbours, a subtle reference to Sunni rival Saudi Arabia. But he also signalled that Iran seeks to expand its power as a counterbalance to foes across the region.

“Wherever there is oppression and crime in the world, in the heart of Europe, in the US, Africa, Yemen, Syria, Palestine … we will stand by the people,” he said, referring to Iran-backed militias like Yemen’s Houthi rebels and Lebanon’s Hezbollah.

Read the article by Amir Vahdat in The Sydney Morning Herald.