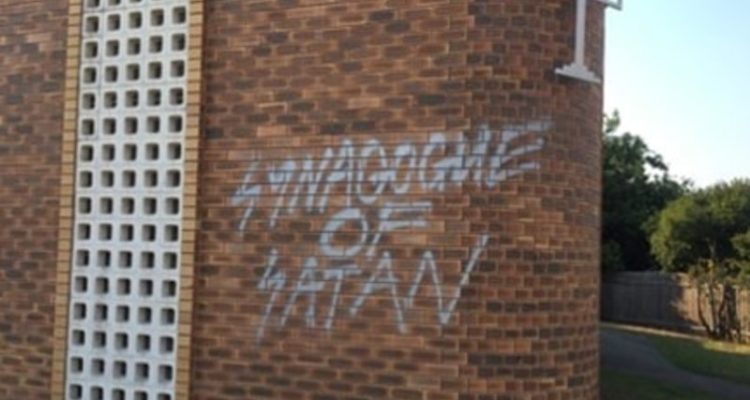 Graffiti outside a Brisbane synogogue in September 2019. (Queensland Jewish Board of Deputies)

Displaying the Nazi flag must be outlawed and decades-old laws updated amid a surge in anti-Semitic behaviour in Queensland, a peak Jewish group has argued.

Six in 10 members of the Jewish community, from Cairns to Coolangatta, said in a recent survey they had experienced anti-Semitism, while neo-Nazi groups have become increasingly active in Queensland.

Queensland Jewish Board of Deputies vice-president Jason Steinberg said police were very responsive to complaints but the laws did not deter racists.

“Of those Jews in Queensland who experienced anti-Semitism (according to a survey carried out by the group), half were either abused, harassed, intimidated or bullied simply because they are Jewish and, distressingly, many of these incidents occur in the workplace,” he said.

“Fifteen per cent of Queensland Jews also reported hate-fuelled incidents that related to Israel and/or Zionism.

“We have also seen an increase in activity by white supremacist, neo-Nazi and other far-right extremist groups whose members seem to act with impunity, as well as anti-Israel activists targeting local Jews.”

However, more than nine in 10 victims remained silent.

Mr Steinberg said people were reluctant to report anti-Semitism due to fears of more racism by the perpetrators or they believed police could not help.

Read the article by Felicity Caldwell in WAToday and the Brisbane Times.