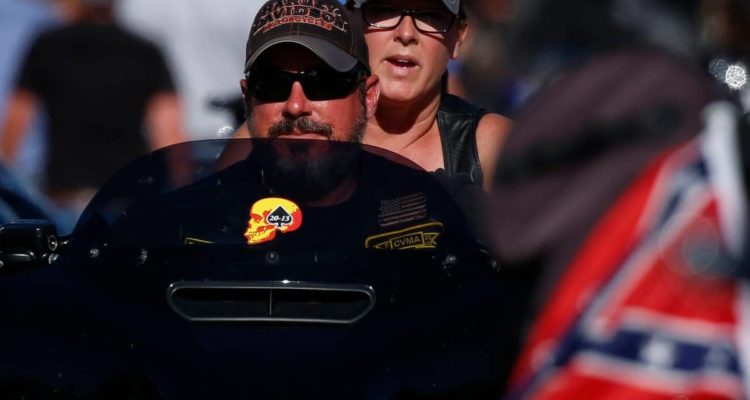 Nobody was tearing these Confederate Flags down. (Jim Urquhart)

As hundreds of thousands of bikers ride into Sturgis, South Dakota, for it’s annual motorcycle rally, vendors selling merchandise featuring Nazi imagery and confederate flags were once again in the spotlight.

According to local ABC News affiliate KOTA, vendors at this year’s rally, which is held during the first ten days of August, are selling merchandise bearing Nazi imagery under the guise of supporting freedom of expression for riders and attendees.

One hat bears the initials “SS” of the Schutzstaffel, a Nazi military unit. Under the hat’s lid, the text reads, “support your local white boy.”

Another was branded with a swastika. According to the report, many vendors also sold Confederate flag memorabilia, to cater to customers who view it as a “heritage” symbol.

“A lot of bikers, you know, it’s a freedom thing. A lot of bikers want to be free and voice their opinion and I like to cater to what they want. It doesn’t mean that I necessarily believe in everything but, you know, I like to please everybody,” said Jenny Alonso, a vendor at the rally, in an interview with KOTA.

Read the article by Azmi Haroun in Business Insider Australia.